Victor Osimhen, who set up the first two goals, then helped himself to a second-half brace. 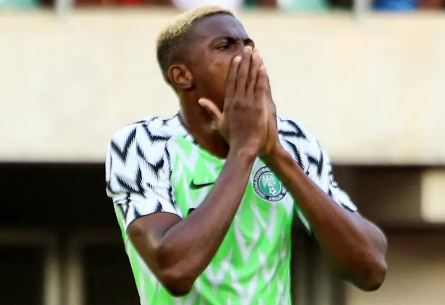 Super Eagles striker, Victor Osimhen, has reacted to his side’s 4-2 victory over Lesotho in a 2021 Africa Cup of Nations, AFCON, qualifier encounter on Sunday in Maseru.

It would be recalled that the hosts took the lead in the 11th minute through Masoabi Nkoto.

However, the Super Eagles fought back through Alex Iwobi and Samuel Chukwueze, to take a 2-1 lead into the break.

Victor Osimhen, who set up the first two goals, then helped himself to a second-half brace.

Collins Awaziem’s own goal did not do much damage, as Gernot Rohr’s men sealed a second successive win in Group L.

Reacting, Osimhen took to his official Twitter page to celebrate the crucial victory and to express his happiness at his contribution in the game.

He wrote: ”Great game/performance from the whole squad.

“Very happy to get 2 goals and 2 assists. GOD is the greatest.We move.”