It has been reported that pressure is coming from PDP leaders and groups within the party to get Uche Secondus out. 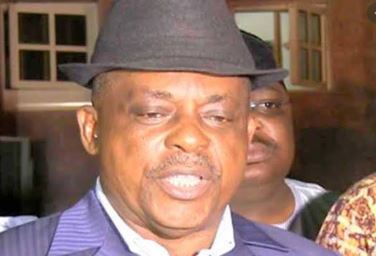 National Chairman of the Peoples Democratic Party (PDP) Prince Uche Secondus is under intense pressure to vacate office over alleged constitutional breaches, misappropriation of funds and failure to lead the party to victory in the 2015 and 2019 general elections.

Secondus has also allegedly failed to call for major meetings of the various organs of the party including the National Executive Committee (NEC) meeting which is the second highest decision-making organ of the party.

Daily Trust reports that the pressure is coming from PDP leaders and groups within the party. A former Special Adviser on Public Affairs, to President Goodluck Jonathan and member of the defunct Presidential Campaign Council for Atiku Abubakar, Malam Nasir Zahradeen, confirmed to a correspondent last night that majority of PDP stalwarts and power brokers were demanding for Secondus’ resignation.

“Secondus must go and he must be investigated by the EFCC, ICPC and the SSS because of the alleged impropriety, alleged putting of his hands on the funds of the party which is unacceptable.

“You cannot say whether the other members of the NWC are doing well or they are not doing well. But if the head is rotten, definitely, you don’t expect any action from the rest.

“Now we have lost the Kogi and Bayelsa elections. On Bayelsa, he (Secondus) connived with the governor. Apparently, the governor had his own idea of getting his kinsman to be the governor while he will get the senatorial seat,” he said. Similarly, a highly placed source from the North West, who sought not to be named, passed a vote of no confidence on Secondus, saying he cannot guarantee victory for the party any more.

“We all had confidence in Secondus when he emerged. But later we discovered there were issues that we did not envisage. The leadership of Prince Secondus has several lapses and breaches of the constitution of the PDP. “For instance, from the very time we lost the 2019 elections, I doubt if there has been any NEC or caucus meeting to discuss the issues and that is weighing us down. “If they can’t deliver us today, how can we be sure they will deliver us tomorrow? Actually, I cannot ask the other members of the NWC to resign but sincerely, Secondus should resign because I doubt if he is willing to get us to the Promised Land. He should resign,” he said.

But the Special Adviser on Media to Secondus, Mr. Ike Abonyi, dismissed the allegations in a telephone chat with our correspondent, saying the party had more serious issues to discuss on the threat to democracy.

“The allegations are baseless and unsubstantiated. Let them provide evidence that Secondus is a thief; that he dipped his hands into the party’s funds.

“The constitution says one NEC meeting to one quarter. And between February and now, he called NEC meetings three times. So he has not violated the PDP Constitution,” he said.

Spokesperson of the party, Kola Ologbondiyan also dispelled claims that Secondus was under pressure to vacate office. “The National Chairman is not under any pressure except the fact that we believe that democracy is gradually being killed by this government and we believe that as the main opposition party we have a responsibility to salvage democracy,” he said.