Rotimi Amaechi has revealed how he coerced a Chinese construction firm, CCECC, to construct a university for Nigeria in the hometown of President Buhari. 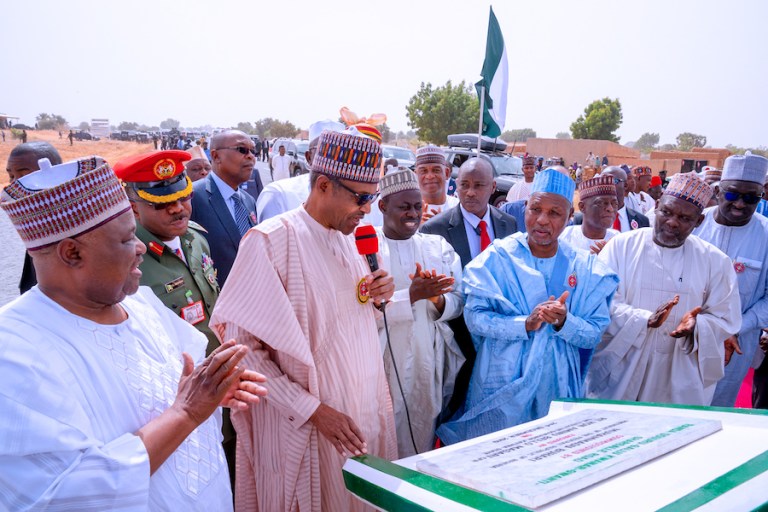 According to Premium Times, Nigeria’s transportation minister, Rotimi Amaechi, has spoken on how he coerced a Chinese construction firm, CCECC, to construct a university for Nigeria in the hometown of President Muhammadu Buhari.

Mr Amaechi spoke Monday during the groundbreaking of the Transportation University in Daura, Katsina State.

Mr Buhari is from Daura.

In his speech at the event, Mr Amaechi said CCECC, a company that has won several multi-billion naira government construction contracts, was initially reluctant to construct the university.

“I engaged the companies, the first engagement was when they were constructing Lagos-Ibadan.

“They were not so keen at spending their funds to build a university for Nigeria, until I refused to sign the contract for the Lagos to Ibadan railway,” the minister said, apparently seeing nothing wrong in his action.

Mr Amaechi’s speech was published by the government-owned News Agency of Nigeria (NAN).

The minister then said he only agreed to sign the Lagos to Ibadan railway contract if CCECC met three conditions.

“I insisted that I will only sign if three things were done,” he said.

“The first thing is to take our children to China and train them by giving them first degree in railway technology.

”Today as I speak, 60 of our children are in their second year and we thank CCECC and 90 are on their way to China this week, making it 150.”

PREMIUM TIMES last year reported how Mr Amaechi and other top officials of the Buhari administration commandeered scholarship opportunities offered to ordinary Nigerians. Young Nigerians who had no relationships with influential public officials were eventually excluded from the scholarships.

Mr Amaechi also spoke on the other two conditions he gave to the CCECC.

”The second is that, if we must sign the purchase of locomotives in China, they must build a factory where we can construct for coaches, locomotives and wagon and today at Kajola that factory is being constructed.

”Finally, I insisted on the University of Transportation and today we are here for the groundbreaking of the university and for all we are grateful to CCECC and the Chinese government.”

The minister said he has no regret for his actions including siting the university in Mr Buhari’s hometown.

“When we sited the factory at Kajola, there was no noise, nobody debated about it, nobody abused us for it unlike the site for the university.

”Daura is in Nigeria, it is not in any other part of the world. It is not in Niger Republic, Biafra or Mali, it is in Nigeria. So, what is wrong in siting the University of Transportation in Daura?

”I have no regret siting this university where I have sited it, it is not because I want to get any gain,” Mr Amaechi said.

He also said the university’s land, which is about 413 hectares, was donated by the Katsina government.

In his speech at the event, Governor Aminu Bello Masari of Katsina State said the project will further “boost the efforts of the state in providing sound education and technical skills to indigenes of the state.”

In his speech, President Buhari said he gave his consent to the university “to encourage the development of indigenous capacity which is part of his commitments to Nigerians.”

“The project is part of the ongoing effort of the federal government towards promotion and development of indigenous capacity through technology acquisition and knowledge transfer to effectively maintain and operate numerous railway infrastructure,’’ the president was quoted as saying in a statement by his spokesperson, Garba Shehu.

“When established the university would among other things pave way for (the) domestication of railway engineering and general transportation sciences in Nigeria thereby bridging the technology and skill gap in the railway and ultimately transportation sector.”