The DSS accused Sowore of planning to overthrow the government with his planned protest, the basis upon which he had been detained. 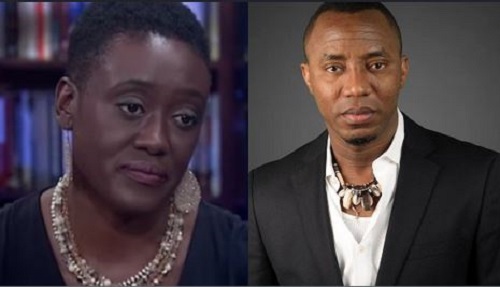 Wife of Omoyele Sowore, the convener of the RevolutionNow protest and publisher of Sahara Reporters, Mrs Ope Sowore, has sent a message to President Muhammadu Buhari that she and her children are waiting for the return of her husband.

She said she had no clear roadmap on how to handle the situation but that she had sent appeals to the United Nations and had been working with Amnesty International and many other organisations to help raise awareness and “hopefully help to secure the release” of her husband.

Speaking to PUNCH on the telephone on Friday, Sowore’s wife said, “I’m concerned about what happened to my husband. It’s less than 24 hours that the Nigerian government has basically turned around and shown a gross abuse of power. I am praying and hoping that it will be resolved so that he can come home to meet me and the children.

“No clear roadmap or script on how to handle a situation like this. The reason why there is rule of law is because it protects people’s basic rights and the fact that Buhari and the DSS have refused to do that is a matter of great concern.

“We are currently working with many international organisations to help advocate on his behalf and we have sent several urgent appeals to the United Nations.”

Sowore was arrested on August 3, 2019 over a planned protest, which he tagged ‘RevolutionNow’. The DSS accused him of planning to overthrow the government with his planned protest, the basis upon which he had been detained.

Officials of the Department of State Services had on Friday invaded the Federal High Court in Abuja to rearrest Sowore, who was released alongside his co-defendant, Olawale Bakare, on Thursday after they had spent over three months in the DSS custody.