Some rescuers who were searching for a missing plane have found some human remains and debris in the process. 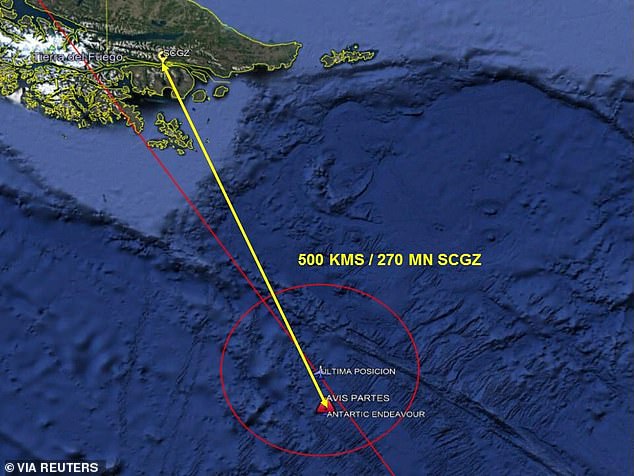 The missing aircraft was en route from Chile to a remote Antarctic research base when it vanished from radar around 6.15pm Monday with 38 people on board

Search teams have found human remains while hunting for a Chilean military aircraft that went missing en route to the Antarctic.

It comes after a piece of 'sponge' debris, believed to have come from a fuel tank, was discovered Wednesday around 20 miles from the plane's last known position.

'[Search teams] have told us they found other airplane debris as well as human remains from those on board,' local mayor Jose Fernandez said.

The C-130 transport plane and 38 people on board disappeared at 6.13pm local time Monday, on the way to Chile's Eduardo Frei base on the Antarctic coast.

Of those on board, 17 were crew and 21 were passengers; three were civilians.

The first piece of debris was spotted by a private plane assisting in the search in a stretch of treacherous water known as the Drake Passage on Wednesday.

A Brazilian ship in the area equipped with radar instruments was then sent to scan a 10,499ft (3,200m) stretch of the sea bed to try and find the rest of the wreckage.

A Brazilian navy vessel has also recovered suspected wreckage from the plane.

'The parts of the plane and the objects were found approximately 280 nautical miles (520 kilometers) from Ushuaia in Argentina,' Brazilian President Jair Bolsonaro wrote on Twitter.

'The Brazilian navy ship remains in the search area in coordinated actions with the Chilean authorities and two boats from the ship continue collecting remains,' he added.

Search vessels and planes from the United States, Uruguay and Argentina were also combing nearly 385 square miles around the plane's last known position.

Mosqueira said earlier that a decision had been taken to widen the search zone after improved visibility and weather conditions.

'We still don't have any new information, but we are making every effort to be able to find the plane,' Chile government spokeswoman Karla Rubilar told local radio.

The Vatican said Pope Francis, who was born in Argentina, was following the situation closely and keeping the families of the missing in his prayers.

Chile said the two pilots at the control of the aircraft had extensive experience, adding that while the plane was built in 1978, it was in good condition.

The air force said it flies this route monthly.