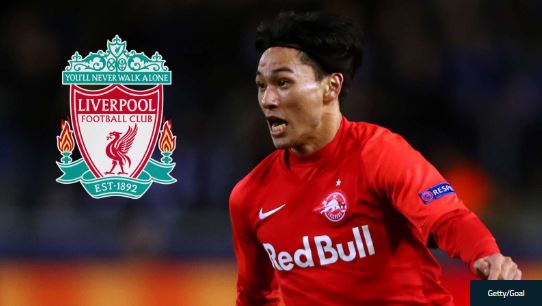 Liverpool are set to beat Manchester United to the signing of Salzburg midfielder Takumi Minamino in January.

The Reds are confident of landing the Japan international after discovering a £7.25m ($9.6m) clause in the 24-year-old’s contract.

Minamino impressed in both games for Salzburg against Liverpool in the Champions League group stage, and Reds boss Jurgen Klopp believes he would be an ideal addition to his squad as they target glory at home and abroad in the New Year. Klopp has been taken with his energy, movement, skill and versatility.

Minamino can play anywhere across the frontline, as well as in midfield, and would be eligible to play for a new club in the knockout stages of the Champions League after Salzburg’s demotion to the Europa League – which Liverpool secured with a 2-0 win at the Red Bull Arena on Tuesday night.

The Reds have accelerated their interest having discovered Manchester United are also keen, as well as a host of Bundesliga clubs including Borussia Dortmund and RB Leipzig. There is also interest from Italy, where Juventus and Roma have made enquiries.

Sources have told Goal that sporting director Michael Edwards believes Minamino to be worth more than treble his release clause, and the Reds believe they are now leading the race thanks to the work put in by recruitment staff to unearth that clause. A deal could even be completed when the window opens on January 1.

Liverpool expect to allow both Rhian Brewster and Curtis Jones to leave the club on loan in January, with the club eager for the teenage stars to pick up senior experience.

Swansea, the Championship club, are interested in signing both. The Welsh outfit are managed by former England under-17 coach Steve Cooper, who has worked with both players, although Liverpool would want reassurances about playing time, aware that not all of their loan deals for young players have paid off in recent seasons.

Both Jones and Brewster are set to play for Liverpool in the Carabao Cup quarter-final at Aston Villa next week, and Jones in particular has impressed Klopp and his staff with his development in the last 12 months.

The 19-year-old made his Premier League debut at Bournemouth last weekend and was on the bench for the win at Salzburg in midweek.