Poison, Stabbing And Suffocation: Graphic Details Of How Maersk Boss' Wife Was Killed


A poisonous liquid was forced down her throat but when she failed to die, they stabbed her viciously. 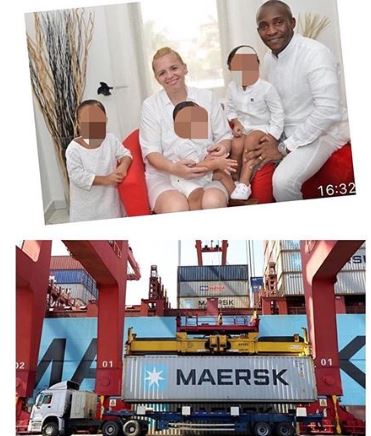 Olamide Goke, one of the suspects arrested in connection with the murder of Bernadette, the Hungarian wife of Gildas Tohouo, Managing Director of Maersk Nigeria Limited, has revealed what motivated him.

Explaining what transpired between them, Goke, 34, said, “We didn’t intend to kill her. I just wanted us to collect some foreign currency from her because she just returned from oversee four days back.

When we got inside, I asked her to give us money but she said she had no money with her. Immediately she recognised me, my partner said it would be dangerous for us to leave her alive.

At that point, we went to get the sniper used in the garden and asked her to drink it. She asked why we were doing that and I reminded her that it was because she once called me a black pig.

On the day she addressed me as a black pig, I had gone to demand for my salary. They were owing me N160,000 as payment for four months salary. The agreement was to pay me N40,000 monthly and it accumulated for four months. Instead of giving me, she said, “get out of my house, black pig”.

Back to the operation in the flat, Goke said, “As we tried to force the sniper down her throat, she was vomiting it out, Akanbi used a pillow to suffocate her. Yet, she was still struggling with us. It was at that point that we stabbed her in different parts of the body.
We did not know that her husband was in. We thought he travelled because he was never at home. When we saw him, we attacked him with the knife used on his wife. But he ran back inside his bedroom. .

At that point, I rushed into their kitchen to get another knife to stab oga. If they had given me money, we would have left quietly. The couple are stingy. Anytime I approached them to give me money, they would refuse”,he said.

His partner in crime, Adeyinka Akanbi, who resides in Mushin area of Lagos, said he was invited by Goke, to collect the money owed him. “The plan was never to kill her. It took us three weeks to plan how to enter the flat,” he added.