Man Leaves Behind A 6-Page Suicide Note, Kills Self


A 37-year-old Kenyan man has taken his life due to a chronic disease after accusing his siblings of allegedly abandoning him. 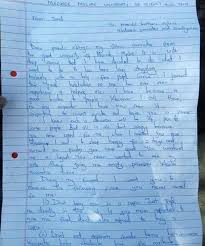 Economic hardship, deteriorating health, neglect by his family and friends and spending days on an empty stomach are some of the reasons 37-year-old Kelvin Majiwa, a Mombasa resident, Kenya gave for committing suicide.

Majiwa, a bachelor, fatally hanged himself in his rented house at Zamzam area in Likoni on Friday, December 13. On a table in his room, he placed a six-page suicide note justifying his death ideation.

The deceased, who had a chronic disease, accused his brother, sisters and most of his friends of “abandoning him in his hour of need”.

He said  in the letter written in an A4 notebook that since he got sick, he never had any close family member or crony to turn to while seeking food and money for treatment.

Majiwa said: “My brother and sisters have a lot of money to spend for the holidays, yet I am here languishing under disease and malnutrition”.

The deceased vowed to haunt his siblings, saying “they will never know peace for neglecting me”.

In the note, Majiwa claimed that his brother sold their family land in Migori, and he  never allocated even a single coin for his treatment.

“Hamisi can tell you that my family is uncooperative. They have never supported me since I got sick. When I was employed, and had money, I spent at least Ksh60, 000 on my brother’s house rent.

"After losing the job, and becoming ill, he refused to assist me. I remember he even declined to help me with Ksh500 for a hemoglobin test,” lamented Majiwa in the note.

According to the deceased, his brother blatantly refused to come to his rescue despite having a well-paying job.

In his letter, Majiwa listed some of his friends, who helped him while he was ailing.

One of Majiwa’s friends, George Oduor, told K24 Digital that the 37-year-old “died a bitter man”.

“During his days of good health, Majiwa was extremely generous and kind,” said Oduor.

“He lost hope in life the moment he lost his job, and when his subsequent attempts to seek financial help from his family bore no fruit,” added Oduor.

In his suicide note, Majiwa also listed the owner of a local restaurant as some of the people who came to his aid in his hour of need.

“I thank him for giving me food at no cost when he learnt of my situation,” said Majiwa.