Two women have been arrested by the police in Lagos after engaging in a violent fight over a man. 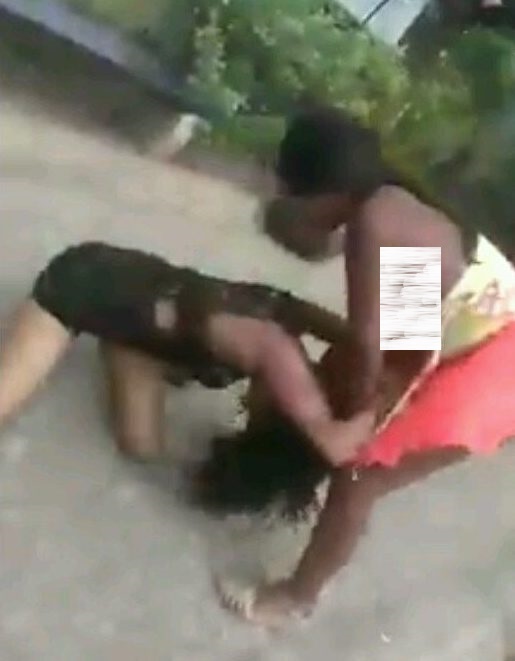 Two women fighting over a man in Lagos state (Photo: PM Express)
Police operatives from Ejigbo Division in Lagos led by CSP Olabisi Okuwobi have arrested two married women, Okeowo Biodun, 34 and Akpan Joy, 46, who reportedly engaged in public fight over husband.
PM Express reports that the incident happened at Caroline Street in Ejigbo Lagos, where they reside.
They were subsequently charged before the Court for affray, malicious damage and assault and remanded in prison custody pending when they will perfect their bail conditions.
What caused the fighting was not known to the residents, who witnessed the ugly incident and then contacted the Police for prompt action.
It was gathered that Biodun attacked Joy’s supposed husband by pouring waste water over an undisclosed matter. Hence Joy damaged Biodun’s flower pot, which led to the public fight before the Police were contacted.
They were arrested and detained at the station for causing breach of public peace by engaging in public fight.
During interrogation, it was discovered that the cause of the fighting was Joy’s husband, Akpan, who Biodun was said to have attacked over an undisclosed disagreement.
The Police found them culpable and thereafter charged them before the Ejigbo Magistrates Court for the alleged offence.
They pleaded not guilty.
The prosecutor, Supol Kenneth Asibor, asked the Court to fix a date for hearing since they pleaded not guilty to enable the Police to prove that they actually committed the offence.
Thus, the Presiding Magistrate, Mr. T.O Shomade, granted them bail in the sum of N50,000 with one surety in like sum.
However, they were remanded in prison custody pending when they will perfect their bail conditions. The matter was adjourned till 20th January, 2020.
Top Stories