Man Strangles Transgender After She Told Him She Was Born Male


A man has been charged for murder after he engaged in sexual contact with a transgender and strangled her to death upon revelation. 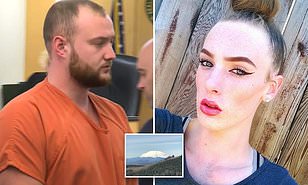 A man murdered a transgender teen in a rage after he found out she was born male, court documents allege.

David Bogdanov, 25, was seeking a sexual encounter with tragic Nikki Kuhnhausen, 17, when he strangled her to death in a rage, it is claimed.

Nikki was reported missing on June 6 and was confirmed dead after her skull and other remains were found near a mountain in the US state of Washington on December 7.

Bogdanov was arrested and charged with second-degree murder on Tuesday after telling Vancouver police that he was with Nikki in his van, but kicked her out of the vehicle when he found out she was transgender.

The Russian told investigators that homosexuality is unacceptable in his culture and he denied having or talking about sex with Nikki.

Detectives discovered that Nikki and Bogdanov had met up on the night of June 5 after communicating with each other on Snapchat, OregonLive reported.

A police officer wrote in a probable cause affidavit: “I believe that David became enraged at the realization that he had engaged in sexual contact with a male whom he believed to be female and strangled Nikki to death."

After killing Nikki, Bogdanov drove her body to Larch Mountain and dumped it there in a woodland, police allege.

Nikki's mum told police she the teen had been staying with a friend and was last seen there at about 5am on June 6, when she left with a Russian man.

Police obtained a search warrant and checked Snapchat accounts belonging to the victim and suspect.

Messages confirmed that Bogdanov had picked her up, it is claimed.

Officers eventually tracked him down and interviewed him in October.

Additional remains, jewellery and clothing belonging to the teen were found during a search by police.

The court documents contained grim details of the scene.