Van Drew said he has always been a moderate, and blasted unnamed Democrats for moving the party too far left. 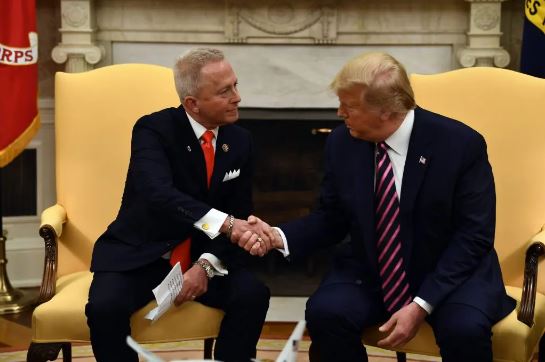 Van Drew said he has always been a moderate, and blasted unnamed Democrats for moving the party too far left.

Van Drew rattled off a string of issues he said pushed the party away from him, criticizing the Green New Deal proposal and accusing some Democrats of downplaying America’s exceptionalism.

He praised Trump’s record on the economy and pledged loyalty to his new party.

The announcement ended days of political uncertainty for Van Drew, after the revelation last Saturday that he planned to switch parties.

He joins a rare group of defectors in recent years. Former Alabama representative Parker Griffith, a longtime Democrat, became a Republican in 2009, only to lose in a GOP primary next year.

That same election cycle, Pennsylvania Republican Senator Arlen Specter bolted to the Democrats before losing the 2010 primary to Joe Sestak.

Pence added Thursday that “another public official from New Jersey” will be following the South Jerseycongressman’s lead. He did not give any details.

Van Drew’s vocal opposition to impeachment enraged Democratic leaders and activists, and prompted plans for him to switch parties.

He voted against both articles of impeachment late Wednesday, disagreeing with the vast majority of his Democratic colleagues, who maintained that Trump abused his power and obstructed Congress.

During the day long impeachment debate Wednesday Van Drew sat with Republicans on the House floor, shaking hands with GOP lawmakers and congratulating their leaders after their strident defenses of Trump.

On Dec. 11, Van Drew learned from an internal poll just how much his stance on impeachment imperiled his chances to win a Democratic primary.

He proceeded to cut off contact with key allies, and two days later was at the White House to discuss plans to become a Republican.

Van Drew may have hoped defecting to the GOP would ease his path to reelection in a conservative-leaning district. But local Republicans have hardly been welcoming, questioning Van Drew’s mostly liberal voting record and relationship with the state’s Democratic machine as troubling.

“He will have to prove he is with us on more than just the issue of impeachment,” Jacci Vigilante, chair of the Gloucester County GOP, said recently.

All three Republican candidates who were running for his seat will stay in the race, for the moment undeterred by Trump’s Oval Office endorsement of Van Drew, NAN reports.

“Bring it on,” said Bob Patterson, a Republican candidate for Van Drew’s seat, in a statement.

“South Jersey citizens deserves a congressman who will fight for them and their conservative values – not a liberal opportunist who fights for himself.”

Trump has fired off a couple of tweets lauding Van Drew, but it remains to be seen how hard he will campaign for the longtime Democrat in a Republican primary.

At least eight members of Van Drew’s House staff have resigned, along with all three members of his campaign staff, NAN reports.

Six of his former aides will be hired by New Jersey Democratic Representative Frank Pallone to work on the House Committee on Energy and Commerce, which Pallone chairs, according to sources familiar with the matter.