4-year-old Boy, Seven Others Burn To Death In Ghastly Crash In Delta


According to eyetimes, the bus somersaulted several times before it caught fire, which consumed some of the passengers. 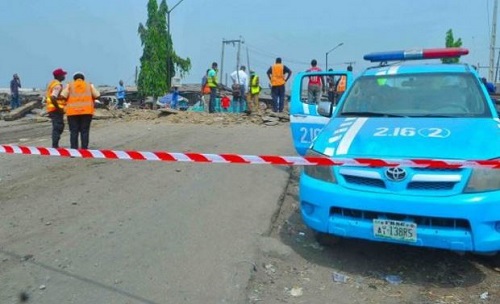 An auto crash, which occurred on the Asaba-Benin Expressway around Issele Azagba/Akwukwu Igbo, on Tuesday, claimed the lives of a driver, motor boy, a four-year-old boy and five others.

Four others, who survived the accident, have been admitted to the Federal Medical Centre, Asaba.

It was gathered that the accident occurred when the driver of a truck laden with crates of beer crashed into an 18-passenger bus.

It was learnt that the four-year-old boy, the truck driver and his motor boy as well as five others were roasted following an explosion that followed the crash, while three others standing by the roadside sustained varying degrees of injury and were rushed to the FMC, Asaba.

An eyewitness, identified simply as Miracle, said the truck driver, Mohammad Kurah, was on top speed and veered off his lane to collide with another vehicle before crashing into the passenger bus from the rear.

According to him, the bus somersaulted several times before it caught fire, which consumed some of the passengers.

The Sector Commander, Federal Road Safety Corps, Delta State, Mr Ocheja Ameh, who confirmed the accident, described it as pathetic, adding that it occurred a few metres from the Issele Azagba military checkpoint.

He, however, said the crash claimed only two lives.

“I was at the scene of the accident; two lives were lost, one male adult and a small boy; the injured ones have been taken to the FMC and they are responding to treatment. The accident involved a truck and two  other vehicles,” Ameh stated.

One of the passengers, who was seriously injured and was rushed to the Mother and Child Hospital in Ubulu Okoti, Chinoye Mbaram, said the truck driver seemed to have been drunk judging by the way he rammed their bus unexpectedly, adding that she survived the crash by providence.

In the early hours of Christmas day, another accident was recorded before Umunede when two trucks collided.

Goods worth millions of naira in both trucks were destroyed and two persons were injured.

The accident resulted in several hours of gridlock before the wreckage was cleared by officials of the FRSC.