Aisha appealed to the authorities and others for assistance, saying since the time she lost her two children, her condition became critical since they were the ones helping out. 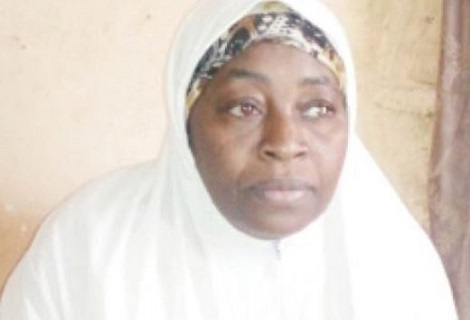 The loss of her two breadwinner sons to Boko Haram left a mother without source for funds for medicare, leading to her loss of sight.

Malama Aisha Umar, also called Indo, is one of the parents that lost their soldier children while fighting Boko Haram terrorists in the North-East.

The 45-year-old woman lives at her parent’s house in Unguwar Dandinshe in Dala Local Government Area of Kano State where she is still looking for assistance on how to treat her eye problems.

But before then, she was residing in Jaji Barracks in Kaduna State where she raised her children who like many other youths developed the love for the military and soon became soldiers.

Speaking with Daily Trust Saturday recently, she said: “Because of interest my two sons Mubarak and Abubakar Hassan joined the Nigerian Army. Mubarak worked in Kaduna State, while Abubakar was in Abia State, after sometime Mubarak was then transferred to Maiduguri in Borno State where he stayed for two years before he became ill.

“We never knew until it worsened. Their Commander called me that we should come to see him but before we could, another call came that he was dead,” Aisha lamented.

She said it was a heavy burden for her but the other son, Abubakar remained her consolation. “Abubakar used to always calm me down with his advice that every soul must taste the agony of death. He said that five times his name appeared to be transferred but that did not happen.”

However, the transfer eventually came and Abubakar had to leave for Maiduguri. The mother said before Abubakar left, she prayed for him.

After four months, he returned to visit the mother and left for the battle field again. Less than three months after, Abubakar and other soldiers were killed in a bomb blast in Sabon Garin Damboa, the mother revealed.

She said, “Three days before his death, Abubakar called me to lend him money before his salary was paid. We were trying to gather the money and send it to him before the news of his death filtered in. It was later confirmed by the authority.”

She said she got N500, 000 for the burial of her two sons but after that she has not received any fund again as the father tries to pursue their benefits.

“Their father met some army officers that he knows to process their benefits, but till now we have not succeeded. Even recently, they call us from Abuja, but nothing has happened,” she noted.

The mother of the two fallen soldiers has yet another thing to contend with and that is her eyes. “I woke up and started feeling pain in my eyes with high fever, I decided to buy some drugs but after taking the drugs, my right eye became blind.

“I decided to visit a private hospital in Tudun Wada, Kaduna. The doctors confirmed that it was blood pressure that caused the blindness. Pain started in the other eye and I went to the National Eye Centre in Kaduna where I started collecting drugs,” Aisha said.

She now struggles to buy drugs for N8, 000 but with little improvement. She could not afford that and so, complete blindness set in and so she was moved to her parents’ place in Kano.

“I have continued to take care of my life at the eye hospital at Mission, but any time I visit the hospital, I have to spend more than N10, 000 because of the drugs,” she lamented.

Aisha appealed to the authorities and others for assistance, saying since the time she lost her two children, her condition became critical since they were the ones helping out.

“My husband is poor and my parents can’t afford to buy the drugs for me. For now, I can’t also do anything for myself because of the situation.

“That is why I’m appealing to government and other agencies to assist me because recently we found that one hospital can help fully treat the illness but I need the money to go there,” Aisha appealed.