In what will come across as a really heartbreaking development, a firefighter has tragically died while battling flames. 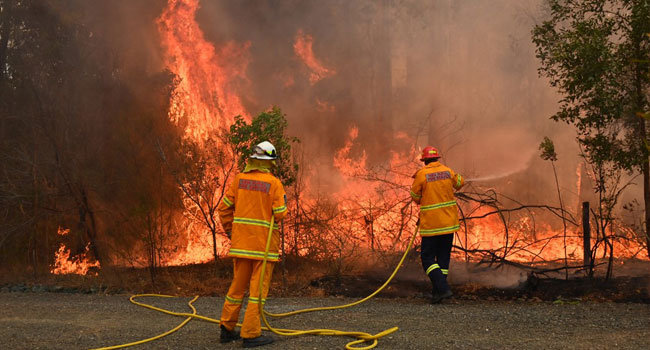 A volunteer firefighter died Monday while fighting bushfires that are raging across eastern Australia, the Rural Fire Service reports.

The service said in a statement on Twitter that the firefighter died when his fire truck overturned at Jingellic, 70 kilometres east of the New South Wales town of Albury.

It is the third death of a volunteer firefighter since the fires broke out in October.

At least 90 per cent of the firefighters battling the hundreds of blazes along the east coast are unpaid volunteers who leave their work to defend their communities.

Two other firefighters suffered burns in the incident.

It is believed their truck rolled after being hit by extreme winds.

“A brave firefighter has lost their life protecting the community east of Albury. Words fail at times like this,” New South Wales Premier Gladys Berejiklian said on Twitter.

Albury is close to the border of the state of Victoria, where firefighters battled an outbreak of new fires on Monday as a heatwave swept across the continent and caused thousands to evacuate.

Fire authorities in Victoria on the weekend told residents and holidaymakers in the Gippsland region, 322 kilometres east of Melbourne, to evacuate in anticipation of extreme fire conditions.

Victoria’s Emergency Management Commissioner Andrew Crisp told reporters Monday that those who had not left the holiday town of Lakes Entrance by midday were trapped, as fires had blocked the only access roads.

An estimated 30,000 holidaymakers were in the region, and not all had heeded evacuation warning, he said.

Crisp said fire crews were fighting flames that were leaping 20 metres into the air and smoke columns rising 14 kilometres in extreme conditions that created its own weather.

“There’s lightning coming out of these smoke columns.

“It is dangerous out there and people need to stay tuned to their local conditions so they can make good decisions,” Crisp added.

The Bureau of Meteorology said the heatwave brought temperatures in Victoria above 40 degrees and fire conditions would be made more dangerous by an expected wind change due late on Monday.

The heatwave is expected to arrive in the Sydney region Tuesday where firefighters are bracing for deteriorating conditions on New Year’s Eve.

The Bureau of Meteorology predicted western Sydney will reach 44 degrees Tuesday with some inland towns being hit with 45 degrees.