A young Nigerian man who returned to crime after spending as many as three years behind bars has explained why he went back. 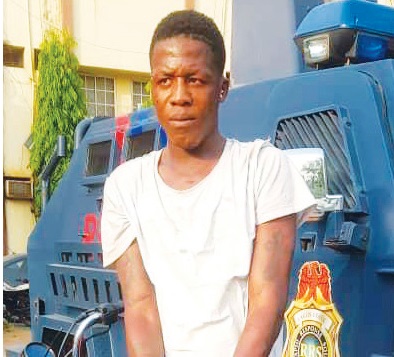 After spending three years in prison for pickpocketing and stealing in 2017, a 27-year-old man, Mr. Tunde Ajeigbe, appears to be on his way back to prison, NewTelegraph reports.

Ajeigbe, described by police as unrepentant suspect, was rearrested at the 7Up area of Ikeja, Lagos State for snatching an android phone from a passenger travelling in a commercial bus.

The police said: “Ajeigbe, with two other accomplices, Ekene and Bolenbe, rode a motorcycle to 7Up area of Ikeja to rob unsuspecting members of the public. Ajeigbe jumped down from the motorcycle and snatched an android phone from a passenger travelling in a commercial bus. He thereafter joined his cohorts on the motorcycle and sped off, but luck was against them as witnesses who were at the scene of the crime scene gave them a hot chase from that spot until they got to Otedola Bridge and alerted RRS men, who were on pin down underneath the bridge. The RRS operatives gave the fleeing thieves a hot chase forcing them to abandon their motorcycle and made for the bush before Ajeigbe was arrested. The two others escaped.”

During interrogation, Ajeigbe confessed to have been arrested in 2017 and was charged to court over similar crime.

He said: “I was arrested around Ojota after I snatched a lady’s phone and got caught by the police. I was remanded in the prison since then and was released on 19th of November 2019 but couldn’t go back to my wife and child. I went back to the house I rented before going to prison but couldn’t find my properties and my family again so I made for the street again."