Officers Killed By Boko Haram In Borno Mourned By Police


The Nigerian police are mourning their colleagues who lost their lives in a fierce battle with the insurgents in Kundori village of Konduga local government. 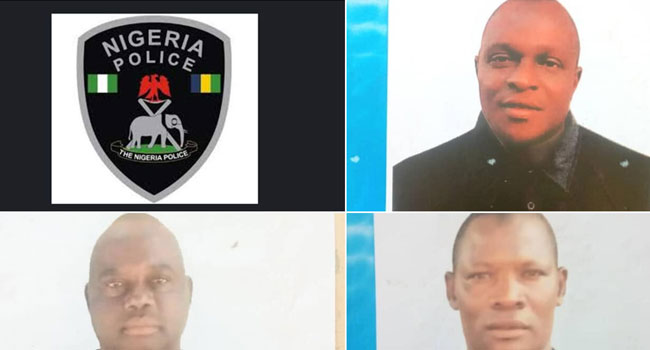 The Borno State Command of the Nigerian Police Force is mourning the loss of three of its personnel during an encounter with the Boko Haram militants.

The personnel who were men of the Special Anti Robbery Squad fell after a fierce battle with the insurgents in Kundori village of Konduga local government.

The SARS commander in Borno State Ibrahim Mohammed, a CSP, broke the news on his verified social media handle (Facebook).

“Yesterday 6th Jan 2020 at about 10:30 AM, SARS team on forwarding operation base at Kundori village, Konduga LG along Maiduguri/Damaturu highway came under heavy attack by Boko haram insurgents armed with five gun trucks.

“After a fierce battle, we lost the above great fighters who have made the squad and the Nigeria police command proud in previous encounters. We pray that Almighty God in His infinite mercy grants them eternal peace in paradise.”

The Commander stated while sharing their published obituary pictures.

Monday’s attack on the Maiduguri-Damaturu highway had caused many travelers to be stranded with the Theatre Commander Operation Lafiya Dole Major General Olusegun Adeniyi running into an ambush late evening of the same day along the same route.