A motorcyclist has been caught on camera being sent flying through the air after a collision with a car. 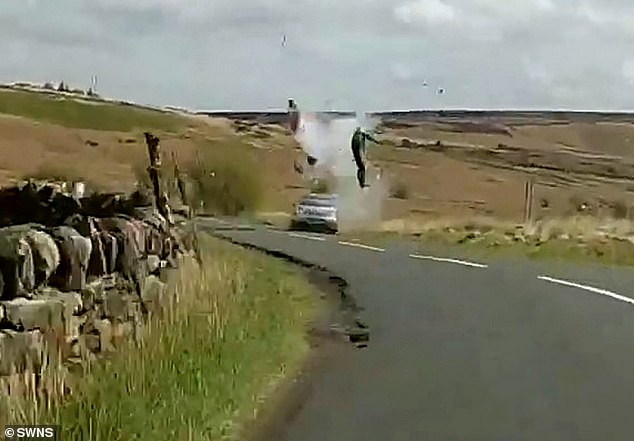 The motorcyclist was sent flying through the air

A motorcycle rider was flung 15ft into the air after being hit by a motorist driving on the wrong side of the road in the UK.

The 35-year-old rider was hit head-on by the driver travelling at 70mph in a 'high-powered' Subaru car in Sheffield, South Yorkshire.

He was seen swerving onto the wrong side of the road while going around a bend in the footage, captured on April 28 last year.

The experienced rider, who is from Barnsley but doesn't want to be named, suffered a broken back, broken sternum and broken wrist in the devastating smash.

The footage shows the car driving down the quiet country road with acres of fields stretching out on either side. 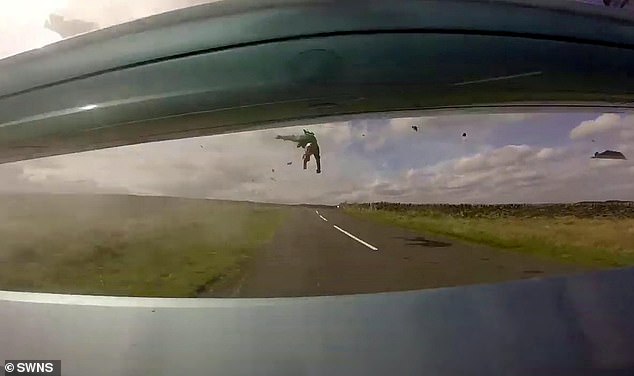 As the driver navigates a bend, his car veers onto the wrong side of the road.

A crashing sound can be heard as the motorcycle collides with the car head-on, sending the dash-cam clattering to the floor.

The footage then cuts to show the accident from the viewpoint of the car behind.

In this clip, the motorcycle rider is sent soaring over the top of the car.

He then slams into the ground as debris fills the air behind him.

The final clip is the rear dash-cam footage from Pratt's car.

In this footage, the motorcyclist can be seen after he is propelled into the air by the impact of the crash.

He rolls along the road before coming to a stop around 100ft from the crashed vehicles. 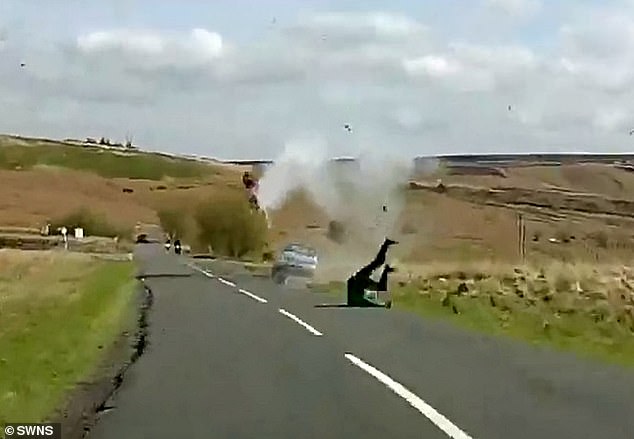 His Suzuki K7 sports bike was completely destroyed on impact.

He has since credited the protective gear he was wearing at the time, including a full-leather air bag suit which activated and inflated on impact, saving his life.

Roads policing constable, PC Phil Carson explains: 'In an ideal world, everyone would drive with care 100 per cent of the time, but sadly this isn't the case.

'The offending driver had no previous driving points or convictions, but on this occasion he demonstrated an exceptional lack of judgement.

'Thankfully, the motorcyclist was wearing a full-leather air bag suit which activated and inflated as he was propelled off his bike.

'Without it, in a collision at this speed, he would most likely have died.'