A tanker has exploded, razing a mechanic village in Anambra state and causing commotion in the area. 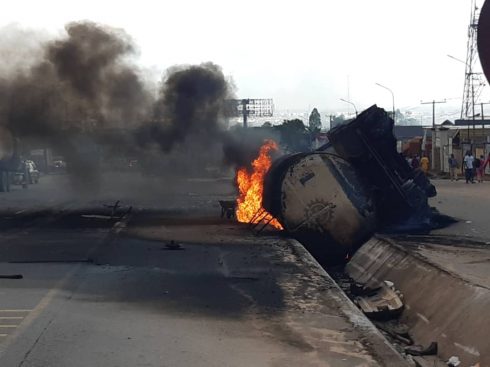 According to a report by Daily Trust, a tanker loaded with premium motor spirit popularly called fuel has exploded inside a mechanic village in Amawbia, Awka South local government area of Anambra state.

The explosion, according to witnesses, happened at about 2.45pm on the Amawbia bypass by Enugu – Onitsha Expressway, Awka on Tuesday.

As at the time of filing this report, no casualty has been confirmed.

A witness who spoke with our correspondent said the fire was still raging.

“But you know the place is a kind of cluster of mechanic workshops. So, your guess is as good as mine,” he said.

Police spokesman in the state, Haruna Mohammed, confirmed the incident in a chat with our correspondent.

“A tanker has just exploded inside a mechanic workshop at Amawbia bypass, Enugu – Onitsha Expressway Awka.

“The fire is still ragging. It is highly advisable you alert residents in the area to steer clear from the premises in order to prevent any disaster.

“The Commissioner of Police, John Abang, has visited the scene and police patrol teams have cordoned-off the area. Fire Service department was equally contacted,” he said.