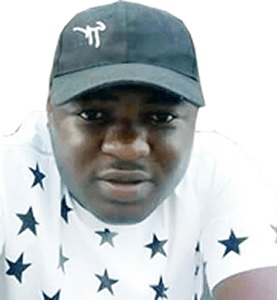 According to The Nation, a 30 – year-old man: Mr Olayinka Bernard Adeleye, whose photograph was published as that of the Nigerian – Dauda Onoruoiza who died alongside other 176 passengers in the Ukraine International Airlines Boeing 737 800 crash in Tehran last week said he is alive.

Adeleye said those who used his photograph as identification for the Nigerian that supposedly died in the crash has caused him and his family enough trauma.

He said his colleagues at work and neighbours now addressed him as ” The man that died in the crash “.

He said the development was giving him sleepless nights as some of his neighbours now call him ghost.

Addressing reporters on Wednesday at his Lawyers Office in Papa Ajao, Mushin area of Lagos, Adeleye said he was yet to recover from the shock as his mother collapsed upon hearing the news that his photograph was published in the media that he died in a crash, when he has never boarded an aircraft in his life.

Besides his mother who was rushed to the hospital, Adekeye said his wife who gave birth a few months ago remains traumatized following the publication of his photograph as the Nigerian among victims of the Boeing 737 – 800 aircraft shut down by Iranian authorities few minutes after takeoff from Tehran Airport.

Adeleye said he was awfully disappointed that any media outfit will go-ahead to publish his photograph as a victim of the Ukraine International Airlines crash when indeed his name is different from the Nigerian – Dauda Onoruoiza purportedly on board the ill-fated airplane.

He said the fake news was even more disturbing given the fact that it was published on his birthday January 10, 2020.

The Mushin indigenes said he has engaged a lawyer to write the media outfit that committed the infraction as the publication has defamed his reputation.

While expressing disappointment over the infraction, he urged relevant security agencies to investigate the source and reason for using his photograph as identification of a man that supposedly died in a plane crash.

He wondered why anybody will pick his photograph from his Instagram page and use it to misrepresent and traumatize his family.

Adeleye said :” My immediate reaction when I learnt my photograph was published in done media outfit as the man that died in a plane crashed in Tehran on my birthday was that of shock, fear and disappointment. Why should anybody wish a young man like me dead? I was even more disturbed when I learnt that my mother collapsed and was rushed to the hospital when she was told. She was told I died in an accident and they later explained to her it was a plane crashed.

” She knew I I did not travel anywhere yet the news devastated her. As I recovered from the trauma I had to do a video call to her to believe I was still alive. Those who are behind this have caused too much trouble in my family. What if my mother had died?

” I think the police and relevant agencies should investigate why people do a thing like to embarrass people going about their own business .”

Also speaking , Adeleye’s lawyer, Femi Martins said though the name of his client was not mentioned in the false publication, the photograph attached to the rumours is his photograph.

He said: ” For the records, I am pleased to inform the public that my client Mr Adeleye Olayinka Bernard is alive.

These have been trying times for him, his immediate family, friends and well-wishers. It can best be imagined that the purported news of the death of the young man broke out on his birthday. It was reported that a close relative of my client collapsed when she saw the pictures.

” This development has indeed caused very grave consequences. it has far-reaching spread to the extent that the Executive Governor of Kogi State, Yaya Bello was reported to have mourned the purported death.

” We are of the opinion that appropriate sanctions should be meted out to people involved in this to serve as deterrence against future embarrassing situations. You may agree that death is the ultimate disaster anyone can think of , in particular for a young man in his prime . This to us is a national embarrassment .”

Meanwhile, investigations reveal that no Nigerian died in the crash as there was no official information linking Dauda Onoruoiza as a passenger on the ill-fated flight.

According to the official passengers and crew members manifests, released by the Ukraine International Airlines and the Iranian Civil Aviation Authority on last Wednesday, the name Dauda Onoruoiza was conspicuously missing and a close look at all of the 176 names listed on both releases, show that none of the names is of Nigerian origin.

Yevhenii Dykhne, president of Ukraine International Airlines, said that most of the dead passengers were in transit to Ukraine to connect to further flights.

Justin Trudeau, Canadian Prime Minister, said 138 of the passengers on the flight were going to fly on to Canada, and that their connecting flight arrived in Toronto with many seats empty.

Boeing, which the publications claimed the ‘dead’ Nigerian worked for acknowledged the crash and sympathised with the families of those that died. It, however, never claimed its staff was on board the ill-fated flight .