The aides of a Yobe Emir who were killed in an Ambush in Kaduna state have been buried in Potiskum.

According to a report by The Nation, hundreds of thousands of well-wishers, friends and family members came out in large numbers for the funeral of the four aides of the Emir of Potiskum killed along Kaduna highway on Wednesday.

The Emir however escaped unhurt in the attack.

A The Nation correspondent, who monitored the event, observed that their funeral was held at the expansive arena of the Emir’s palace in Potiskum.

It was also gathered the Emir receiving medical attention in Kaduna after the attack but his brother Emirs from Tikau, Damagum attended the funeral.

Hassan Mohammed, one of the sons of the Emirate, informed the traditional title holder in the emirate, Makaman Potiskum, Alh. Abubakar Maina Kaina was also killed in the attack with three other guards in the ill-fated attack on the monarch. 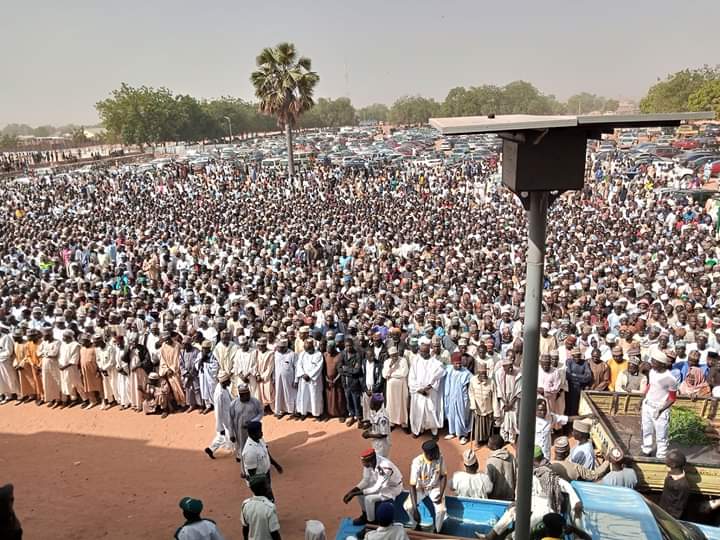 It is not clear how the Emir escaped the attack but unconfirmed information indicated that the Emir may have been traditionally fortified over such incidents.

In a statement from his media aid, Mohammed Abubakar described the attack as heinous, said the chairman was saddened by the attack.

“We are deeply saddened by the news on the gun attack, which was carried out against the convoy of His Royal Highness Alhaji Umaru Bubaram Ibn Wuriwa Bauya.

“We once again condemn this heinous gunmen attack and wish Allah’s mercy upon those who lost their lives, speedy recovery to the injured and convey our condolences to the Pataskum Emirate Council and entire people,” the statement said.