A young football player has wiped the tears off his father's face after buying him a new home. 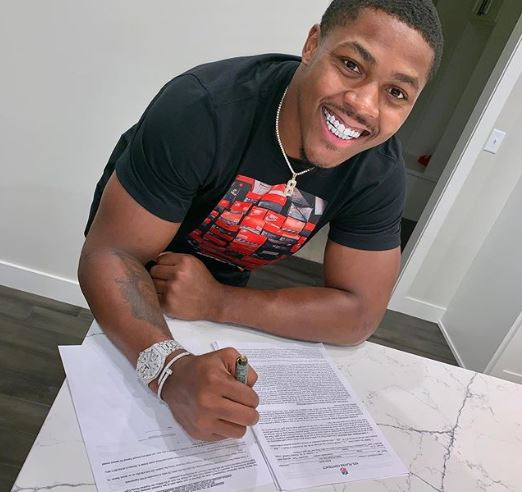 Josh Jacobs
A rookie football player in the National Football League, Josh Jacobs who spent most of his life as a homeless boy has made his father, Marty proud by buying him a new home to call his own.
Jacobs and his siblings didn't have a home when they were small and had to sleep in their father's car because things were very rough for them.
After making it into the NFL, he decided to pay his dad back for not giving up on them and  surprised him with a new house.
According to what he posted on social media, Jacobs purchased a house for his father on Monday night.
The rookie out of Alabama was drafted 24th overall by the Raiders in the 2019 draft. An Offensive Rookie of the Year candidate, Jacobs racked up 1,316 yards from scrimmage on 262 touches and seven total touchdowns in his first campaign. His 88.5 rushing yards per game ranked third in the league behind Titans RB Derrick Henry (102.7) and Browns RB Nick Chubb (93.4).

"I remember seeing him not sleep," Jacobs told NFL Network's Jeffri Chadiha ahead of the draft about his father. "It's crazy because I didn't notice that I was sleeping in a car. I was just thinking that I was falling asleep and waking up. I didn't think anything about it because I felt safe. He would just drive around until he found a place to sleep and then I'd get up the next day and go to school."
Marty Jacobs told Chadiha in April, "One of the things that I'm proudest of with Josh is that he trusted the process. There are a lot of things he experienced as a child that he doesn't want his son to experience. I tear up when I talk about it because God trusted me with those kids and he trusted me not to leave. That's why I'm glad to see Josh embracing the positive stuff from what we went through."
Jacobs and his family have come a long way since his humbling beginnings in a Suburban in Oklahoma.