A bike rider has died a most painful death after a bus whose steering wheel was dragged by a driver and LASTMA official knocked him down. 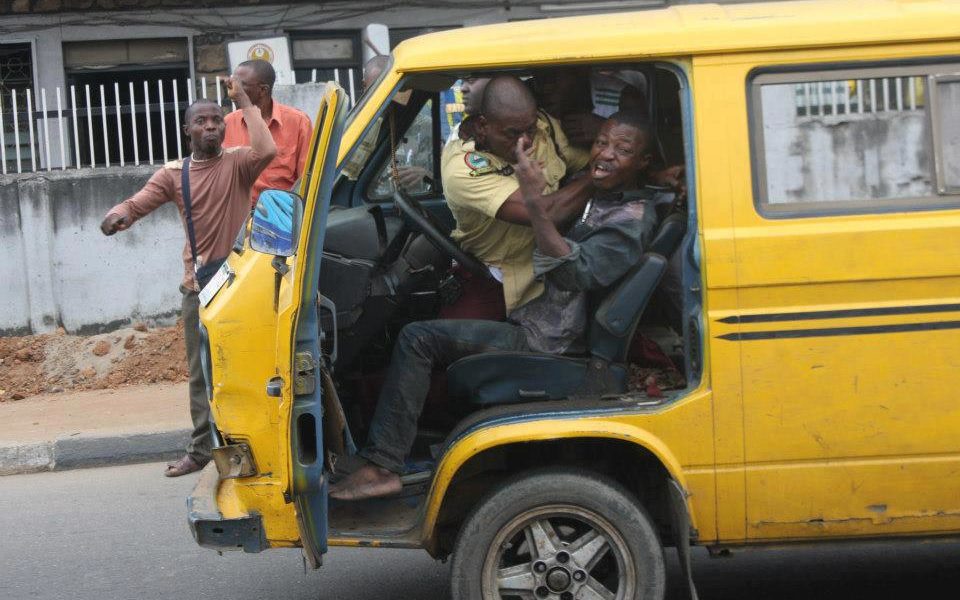 A Lastma official dragging steering wheel with a driver (File photo)
A man identified as John Abanna who operatives a bike-hailing service has died in the hands of an official of the Lagos State Traffic Management Authority and a commercial bus driver.
According to Punch, Abanna was knocked down by the bus at Apogbon, Lagos Island, while the LASTMA official was reportedly dragging the steering wheel with the Danfo driver.
It all started after two officials had flagged down the driver along the road last Saturday for violating a traffic law.
In an attempt to evade arrest, the driver reportedly made to zoom off but one of the officials pounced on his steering wheel.
Punch correspondent gathered that as they were struggling the steering wheel with each other, the driver lost control of the vehicle and it rammed into Abanna’s motorcycle. The rider died on the spot.
Angered by the incident, some youths reportedly took on the officials who fled the scene and headed for their office along Funsho Williams Avenue, Iponri, – a few kilometres away.
An eyewitness, who identified himself only as Tolu, told City Round that the angry youths stormed the agency’s office in Iponri and vandalised some vehicles.
He said, “Some LASTMA officials wanted to arrest a Danfo driver at Apogbon for a traffic offence but he resisted arrest. One of them started struggling the steering wheel with the driver who was not ready to surrender.
“The driver wanted to zoom off not knowing a rider was right beside the bus. As the rider tried to pass, the vehicle veered and knocked him off the motorcycle. He hit his head on the floor and died on the spot.
“The LASTMA officials fled but some ‘boys’ chased them to their office in Iponri and vandalised some vehicles. Some of the officials quickly changed their uniform to mufti.”

Tolu said police from the Iponri division later came to disperse the crowd and restored normalcy.
The LASTMA spokesperson, Mr Olumide Filade, howver, denied that the officials were responsible for the crash.
He said, “The incident has nothing to do with us. From Apogbon, the motorcyclist was riding against traffic when he was knocked down by the bus. No LASTMA official was struggling with the Danfo driver.
“Unfortunately, some miscreants who always support okada riders attacked our office.”
Asked whether there was an attempt to arrest the driver, Filade said, “Even if they wanted to arrest the driver, the bus would not have knocked him (Abanna) down if he was not riding against traffic.”
The Police Public Relations Officer in the state, DSP Bala Elkana, said the corpse had been deposited at the Mainland Hospital mortuary, Yaba, and investigation had commenced.
He said, “Police received information that some commercial motorcyclists popularly known as okada riders had invaded LASTMA office along Funsho Williams Avenue.
“On receipt of the report, a police team mobilised to the scene. It was observed that over 100 motorcyclists were already vandalising vehicles in LASTMA colours.
“Also, a body later identified as John Abanna was lying lifeless right in front of LASTMA office. The deceased was said to have been knocked down by a Vanagon bus around Apongbon Bridge after the driver and a LASTMA official were said to have struggled over the steering wheel which caused the driver to inadvertently run into the deceased.
“Four vehicles were vandalised while the corpse of the deceased has been deposited at Yaba mortuary. Investigation is in progress.”
Top Stories