An accident occurred at oyo state claiming some lives and leaving the others badly injured. 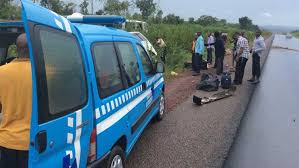 Six persons including two females were killed on Sunday in an auto-crash at Abuduka area of Suurulere North Local Council Development Area (LCDA.)

The accident involved a new truck belonging to a business tycoon and a commercial Mazda bus.

He said that remains of the dead had been deposited at the morgue of LAUTEC Teaching Hospital.

The incident reportedly happened in the morning when the truck brake system failed and rammed into a bus with registration number ABJ 14 XN going to Ilorin.

According to an eye witness, “the bus driver tried, but could not escape the accident. I am not sure if any of the passengers in the bus can survive, though not all are dead, the ones alive are in coma.

“When people tried to apprehend the truck driver, he brought out a knife and threatened to stab anybody who dared move closer. He later took to his heels”, the witness said.