Some Naval officers have sacked a community in Lagos state, sending the residents out of their homes. 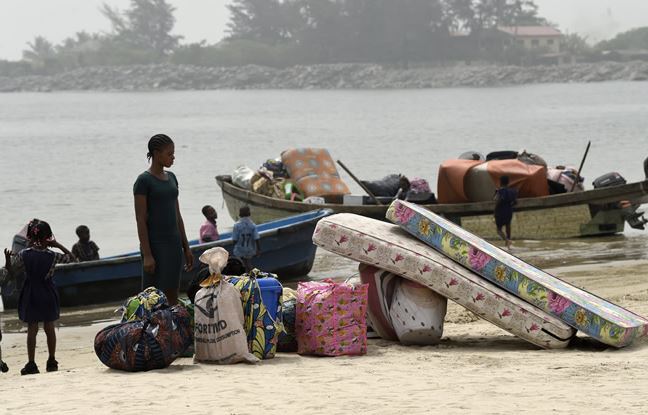 A lady wait for a boat to evacuate household wares following forceful eviction and demolition of homes by the military at Takwa Bay. Photo: AFP

According to Punch Metro, residents of the Tarkwa bay area of Victoria Island, Lagos State, were on Tuesday thrown into confusion when some naval personnel allegedly invaded the community and sacked the residents from their homes.

An eyewitness, who spoke to PUNCH Metro on condition of anonymity, said the naval personnel, who had been on surveillance of petroleum product pipeline in the area, accused members of the community of vandalising the pipeline in a bid to steal fuel.

He stated that the naval personnel used that as an excuse to cover up their alleged collaboration with vandals in puncturing the pipeline to steal fuel, adding that in a bid to cover up their action, the personnel invaded the community and shot indiscriminately and sacked residents from their homes.

Footage recorded by one of the victims showed the residents moving their belongings to the community’s football field.

When contacted, the state Commissioner for Information and Strategy, Gbenga Omotosho, said he needed to make some findings and get back to our correspondent.

He had yet to get back to our correspondent as of the time of filing this report.