Ganduje Blasts Kwankwaso, Says He's The Most Selfish Person He Ever Knew


Rabiu Kwankwaso, a former Kano governor has been described as selfish person to ever cross the path of Ganduje. 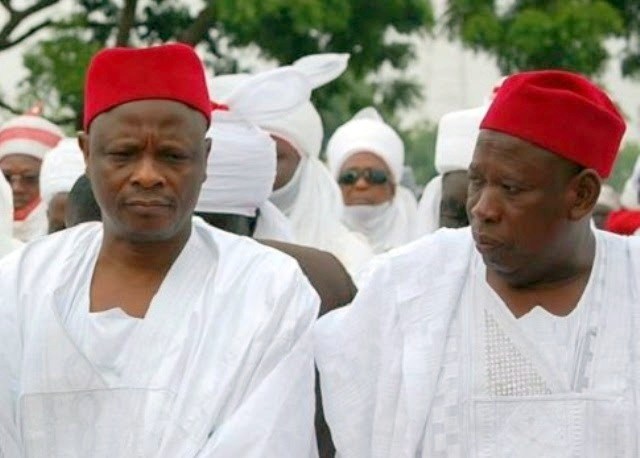 Rabiu Kwankwaso and Abdullahi Ganduje
Governor Abdullahi Umar Ganduje of Kano State on Wednesday described former governor Rabiu Kwankwaso as the most selfish person he had ever known in such that he imposed his whims on all and exploit them for his personal benefit as against the collective interest of all.
According to Vanguard, the Governor made this known in his remarks while receiving leaders of the Peoples Democratic Party, PDP as well as troops of the Kwankwasiyya Movement that decamped to the ruling party, All Progressives Congress, APC in the state.
Ganduje who spoke at length on his political relationship with Kwankwaso, which dated back to the military era also described how loyal he had been to Kwankwaso.
He explained that even the Kwankwasiyya movement was initiated by himself and the decamping PDP chairman Rabiu Sulaiman Bichi to prove dedication to Kwankwaso’s course.
“It is natural to be a bit selfish but I have never seen anyone as selfish as Kwankwaso. It was such that he imposed his whims on all and exploit them for his personal benefit as against the collective interest of all.
“All of us seated here were with him in the past and we made him what he is politically but had to withdraw from his persistent self-conceit.
“We have initiated reconciliations in the past but Kwankwaso is not the repentant type, it is either his bid that is done or he destroys everything,” The governor stated.
Ganduje further explained that even after the Supreme Court reaffirmed his victory, he has called on the opposition to come and join hands with his government to move Kano forward but all Kwankwaso could do to that was to curse everybody for his lack of victory in the legal battle.
In his opening remark, the Kano APC chairman, Abdullahi Abbas reiterated that Kwankwasiyya is dead in Kano as it had lost its initiators.
“Your Excellency, it is a known fact that Kwankwasiyya was founded by the two of you seated here before us, you and Rabiu Bichi, you the mother and father of Kwankwasiyya. Now that you have both left it, there is nothing left of Kwankwasiyya again.
“Never assume that Bichi decamped because their party had lost in the Supreme Court, is not true, we have been with him for long” the chairman declared.
Delivering his own address, the former Kano PDP chairman, Bichi, who narrated how rough it had been for them under Kwankwaso mentioned why they have decided to join the APC.
“Following a call by the president to join hands to move the nation forward and the call by the Kano Governor to come and help build a greater Kano, it has become pertinent for us to come and contribute our quota towards the development of the state.
“We have been forced to remain as opposition for the past 20 years following Kwankwaso even while we were in power, a situation that has not yielded anything good and progressive.
“We need a polity where progress and development of the state are ahead of personal whims and desires and so we have to cut that trend of opposition to set the state along the right track of development just like it is in Lagos state.
“Your Excellency, all of us you see here joining the APC have decided after due consultation to join in the development of the state. Almost everyone that was in the Kwankwasiyya is with us here except for very few and those who other commitments could not allow them to come.
“Among us here are former commissioners, former advisers, and others, all of who you have known for long. If we continue along the path of progressive governance, Kano will surely be ahead of other states in the country and we are all here to contribute our quota,” Bichi stated.
The peak of the event witnessed the decampees replacing their red caps with other colors and designs signifying that they have left not just the PDP but also the Kwankwasiyya movement under Kwankwaso.
Prominent among those who decamped to the APC is Hajiya Binta Spikin, Kwankwaso’s spokesperson, Hajiya Aisha Kaita, a zonal Woman Leader of PDP in Kano, Muhammad Isyaku Taraunu former member House of Assembly and Dr. Idris Bala a renown Kwankwasiyya leader.
Top Stories