It was gathered that the hoodlums invaded the area around 1am and sent shivers down the spines of residents of the communities. 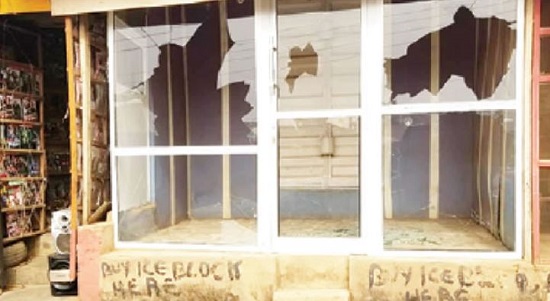 Hundreds of businessmen and women, whose shops are located in the Alakuko and Dalemo areas, which are border communities in Lagos and Ogun states, were shocked on Wednesday as hoodlums destroyed the properties.

Some of the shops were said to have been burgled and the goods in them looted in an operation that lasted about five hours.

PUNCH Metro gathered that the hoodlums invaded the area around 1am and sent shivers down the spines of residents of the communities.

An eyewitness, who identified herself simply as Alhaja Oluwadamilola, stated, “The tension created by the hoodlums woke me and I saw them dressed in black threatening to attack anyone who dare come out to confront them.”

Oluwadamilola added that when the residents came out in the morning, bloodstains and broken glasses were seen all over the place.

She said, “The incident happened around 1am; the hoodlums were many and I saw them while peeping through my window. I saw people in black clothes on Dotun Adeyemi Street and they were armed. I heard them saying, ‘Break that shop, everybody come out’; it appeared that they were ready for war and were challenging the residents to come out. Residents were scared and if anybody had come out, they would have finished the person.

“When some of the shop owners got to their shops this morning, they saw bloodstains on the walls and the glasses of their shops were shattered in pieces. A security guard at Dalemo was seriously injured and is hospitalised. The situation is terrible; they operated from 1am till 5am and took advantage of the situation to steal properties. They destroyed about 100 shops; we are no longer safe.”

A shop owner, Bose Akingbade, said the glasses of over 100 shops were shattered, adding that the Alakuko Police Division had been notified to investigate the incident and to restore normalcy in the area.

The Chairman, Adalemo-Opeoluwa Community Development Association, Audu Idowu, said the bottles used in smashing shops and residential houses were stolen from a shop in the area and urged the state government to intervene to keep the community safe.

He stated, “This is a mystery to us. The people who came to attack us on our street were over 100. They burgled someone’s shop in the area and stole bottles and an engine and used the bottles to destroy over 100 shops in the area.

“They also took advantage of the situation to loot goods from the shops. We want the government to intervene.”

When contacted, the Lagos State Police Public Relations Officer, Bala Elkana, said “When we got the report, we deployed our personnel in the scene of the crime. The whole clash started from a community that falls in Ogun State, which is very close to our division; so, we responded. Some parts of Alakuko, which fall under Lagos State, were also affected.

“We have arrested three suspects in connection with the crime and the Commissioner of Police, Hakeem Odumosu, has sent the Special Track Force on Social Miscreants to the area to combat these miscreants until they are totally defeated.”