Drama As Woman Storms Married Man's House, Insists He Must Marry Her


A married man's marriage is on the verge of collapsing after a woman he slept with invaded his home. 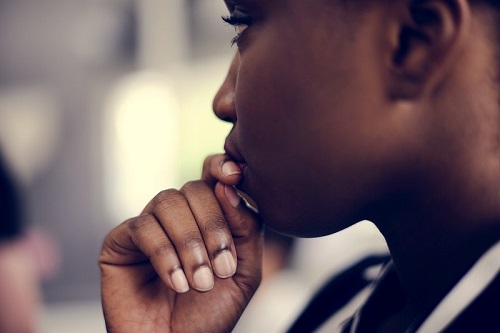 File photo
A married man, Desmond Ife, who lied to a 30-year old lady, Miss Adebowole Adenike, that his wife was late and he was ready to get married has landed in a mess in Lagos after the lady discovered that his wife was still alive with children, a report by PM Express has revealed.
It was gathered that Adenike has forcefully moved to Desmond’s house, insisting that he must marry her as he had promised because he impregnated her and she terminated the pregnancy.
The incident happened at Isheri Olofin area in Alimosho Local Government Area of Lagos State, where they reside.
According to Adenike, she met Desmond last year and they got engaged in a relationship. He gave her false hope of getting married to her and she allowed him to sleep with her severally and eventually got pregnant for him.
She said later that she realised he lied to her that his wife was late as she discovered that he was deceiving her just to be having sex with her. She revealed that during that period, she got pregnant and had to terminate it due to infection but did not know then that Desmond had a wife and children. Adenike wants the marriage to hold despite the fact that she has realised that Desmond was married with children.
However, Desmond claimed that he only touched, slept with her last year and left her. He said he was surprised when she came and forced herself into his house making demands; threatening and destroying his Lexus car. He denied ever promising her marriage or telling her that his wife was late. He said he was surprised when she came to his house forcing herself inside as wife and demanding for money. He said that Adenike’s action by invading his house has affected his marriage seriously because his wife had seen and heard what transpired between him and Adenike.
The action has landed Adenike in trouble as her conduct and malicious damage were reported at Idimu Police Division; she was arrested and detained at the Police Station for interrogation.
After interrogation, she was found culpable and was later charged before the Ejigbo Magistrates Court for the alleged offence. She pleaded not guilty.
The prosecutor, Supol Kenneth Asibor, then asked the Court to give a date for hearing to enable the Police to prove that she actually committed the alleged offence.
The Presiding Magistrate, Mr. T.O. Shomade, granted her bail in the sum of N100,000 with one surety in like sum.
She was remanded in prison custody pending when she will perfect her bail conditions.
The matter was adjourned till 4th March, 2020.
While she was being taken to prison, Adenike insisted that Desmond must continue with the relationship when she is released from prison.
Top Stories