A notorious criminal gang extorting motorists with POS machines have been apprehended by the police. 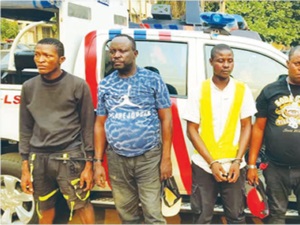 POS thieves after they were arrested by the police
The long arm of law has finally descended on seven suspects allegedly using Point of Sale (POS) machines to extort unsuspecting motorists.
The criminals were arrested by operatives of the Rapid Response Squad (RRS) of the Lagos State Police Command.
The arrested suspects extorted motorists along LASU-Igando Expressway by claiming to be on contract with Ikotun-Igando Local Council Development Area in Alimosho Local Government Area.
The suspects arrested after a complaint by one of their victims, were identified as Taiwo Falodun (48), Mukaila Atanda (48), Adedire Olaniyi (40), Chibuzor Eze (26), Akinseye Alex (48), Rasak Eko (50) and Aro Dotun (46).
They reportedly extorted one of their victims of N41,000 for reportedly not speeding on the Expressway on Thursday January 23. Their victim’s vehicle which was impounded after being forced to drive to their hideout along LASU-Igando Expressway, was released on Friday January 24.
When RRS stormed their hideouts, 15 cars and two commercial buses with deflated tyres were recovered.
Top Stories