Offset, husband of fellow rapper, Cardi B has been arrested by security operatives over an incident. 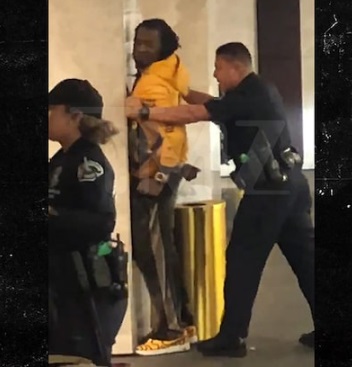 Offset being arrested at a shopping centre
Migos rapper, Offset has ended up on the wrong side of law after being arrested and detained by cops following a report of a person with a gun at an L.A. shopping center. He was eventually released hours later.
Information released by TMZ revealed that law enforcement sources said a call came in just before 8 PM on Wednesday, January 29, of a person with a gun inside the parking structure at The Grove shopping center.
The person who had the weapon allegedly fled the scene, and Offset and members of his entourage were detained by police officers and an investigation began.
In video shared online, Offset who is rapper, Cardi B's husband,  can be seen in a yellow hoodie being pushed against a wall by an officer who then proceeded to place him in handcuffs.
Afterwards, Offset and 3 others were taken to the station for further questioning. Law enforcement sources added that they recovered 2 guns.
Offset was released just before midnight after 2 of the folks detained admitted the guns found were theirs.
Watch the video below:
Top Stories