The story has been told of the woman who was killed by gas explosion just 27 days after her wedding. 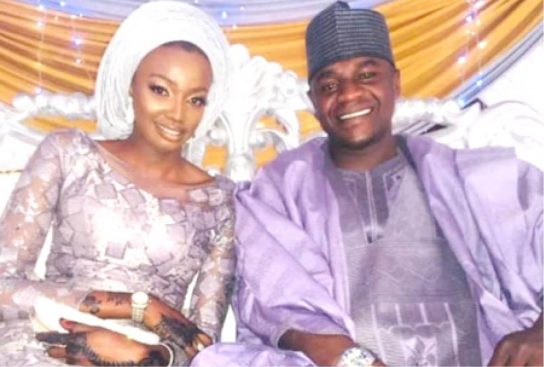 Wedding Day: Najib and late Sa'adatu on their wedding day, 26 days before the explosion

On January 12, 2020, exactly 27 days after their wedding, newlyweds, Sa’adatu Muhammad Babangida and her husband Najib Ahmad were at home in Jos when she complained of toothache. At about 10:30pm she went to the kitchen to brew some java pepper (a blend of coffee) that would help alleviate her pains.

Najib waited in the bedroom but soon heard an explosion from within the house. Most of the ceiling caved in, as did most of their newly-minted lives in what the husband, Najib, would describe as “a terrible moment.” A gas explosion in the kitchen had left Sa’adatu badly burnt, crying for help.

“I started hearing Sa’adatu from the room crying “Inna liLlahi wa inna ilaihi raji’un,”  (to God we belong and to God we shall return.) I then concluded that something dreadful had happened to my lovely wife,” Najib said.

He found his wife on the kitchen floor, writhing in pain, half of her body covered in burns. He rushed her to the Jos University Teaching Hospital where he hoped she could be treated.

What he did not know at the time was that his wife had began her journey to death, which would eventually end on February 3rd when she died from the injuries she sustained in the explosion.

Most of her life after that explosion was spent in the hospital, her body, apart from her face, wrapped in a gauze. In those days, her relatives were optimistic she was going to recover because she seemed to be responding to treatment. She was even smiling at visitors.

Her mother Hadiza Muhammad Babangida was so confident of her daughter’s recovery that the  last time she saw her, she assured her daughter of that.

“My last moment with Sa’adatu was on Saturday, February 1, when I visited her in the hospital. We looked at each other smiling. I prayed and blessed her. I rubbed her head, encouraging and condoling her that she would, by the grace of Allah, survive to recount the story of her tragedy of suffering and celebrate her good health,” she said.

Sa’adat asked her mother if she was sure.

“Yes, of course, you will survive the injuries because myself and other well-wishers have been praying for your recovery and are never worried,” she said.

Two days later, she received calls that her daughter was gone for good.

Sa’adatu was 30 at the time of her death. A graduate of Micro Biology from the Ahmadu Bello University, Zaria, she was enlisted into the N-Power programme and was attached to a Jos North Local Government Primary Healthcare as lab assistant.
From  her stipend, her mother said, her daughter was generous and supported her family.

“Sa’adat lived a life worthy of emulation,” he mother said, speaking softly. “She was a genius, a God-sent person and heroine of Babangida’s family, who often understood  your problems before you shared them with her. She was relentless towards giving out her best to the family from the little she earned as an N-power beneficiary. To my knowledge, nobody has ever said anything bad about her. Her deeds would continue to be remembered.”

Her generosity of spirit was testified to by her husband, who said that despite her obvious pain during her time in the hospital, his wife expressed joy that he was safe from the disaster.

For him, the 26 days of bliss he spent with his wife before the accident would remain something he would treasure as he recalled how they met and fell in love.

“Within just one year of courtship, we fell in love and became engaged because of the understanding we had, not knowing that our marriage was going to be intercepted by such an unfortunate incident,” he said.

He would remember those 26 days for the love and care his wife showed him and the mutual respect and appreciation they had for each other. He described her as a God-fearing woman who would often commit to prayers and spent time reciting the Holy Qur’an.

If there was any regret, it was that he was not there the moment she breathed her last.

“I left her on the sickbed with the doctors for Asr prayers without knowing I would not return to meet her alive,” the grief-stricken husband said.

She died a few minutes after he left the room, with doctors trying and failing to save her life.

Her sister Asia, 27, described the life her sister shared with Najib as “adorable”

“Her adorable married life that was cut short by this unfortunate incident shall remain pitiful to all of us, her relations as her demise came to us with huge sorrow,” Asia said. “We shall continue to share the pain of her irreplaceable loss for as long as we live.”

Her mother, Hadiza, echoed the sentiment.

“The Almighty Allah knows why He took her at the moment we enjoyed her presence. I will live to remember Sa’adat for everything she used to do,” she said.

“Sa’adat would always give us good advice. In fact, she handled everything. Her loss is indeed touching,” her sister, Asia, added.

One of the advice she gave her husband Najib on her deathbed would stay with him forever.

In one of their last moments together, Najib said his wife left a verbal will to him asking him to maintain good relations with her family, saying, “I should not allow anything to break my relationship with members of her family and live peacefully with whoever I relate with.”

With both families united in a short-lived marriage, they have a life of mutual mourning to share going forward.

Najib now knows that on the night of January 12 when the ceiling caved in on him from that explosion, it was a whole world that fell on him and the short life he lived with Sa’adatu.