Two fake uniform operatives have been apprehended for using uniforms to scout for passengers on restricted routes in Lagos. 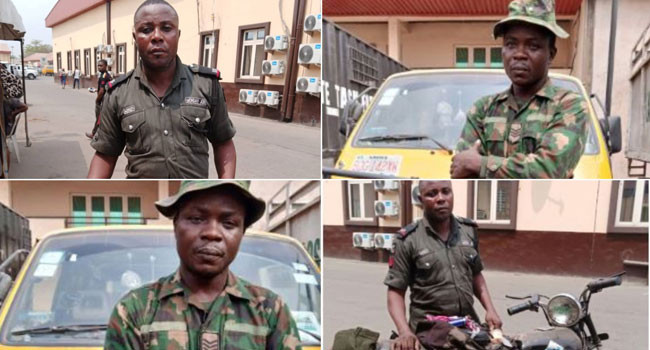 Two suspects have been arrested for impersonating security operatives at Oshodi by officials of the Lagos State Environmental and Special Offences (Enforcement) Unit (Taskforce).

Chairman of the Agency, CSP Olayinka Egbeyemi said the suspects confessed to impersonating security operatives to avoid being accosted by genuine security officers on monitoring duties or patrol.

“Intelligence reports revealed that some dubious-minded motorcyclists are now using fake Nigerian Army/Police uniform to scout for passengers on restricted routes as well as indulging in various forms of fraudulent acts across the State”.

He stated that security personnel on an official assignment with motorcycles must be fully kitted in uniform with their identity card conspicuously displayed. Egbeyemi warned commercial motorcyclists against plying all 475 restricted routes in Lagos State, and also added that they must wear their crash helmets, possess riders’ permit for proper identification of the park they belong while plying other routes.

Confessing to the crime, Monday Job said he bought the uniform from a  Police Officer who was deployed from Lagos to the northern part of the country for N7,000. He disclosed that he has carried out illegal arrest, extorted money from both motorists and motorcyclists plying restricted routes along Lagos-Abeokuta expressway with the uniform.

"I was hawking before I joined Okada business over a year ago and I have been wearing this Police uniform to arrest and defraud Okada riders and making at least N30,000 to N35,000 daily.”

On his own part, Rasak said he got his uniform from a dismissed Army officer to escape checkpoints on roads by Traffic Officers. He further revealed that extorted motorists with the uniform and made between N25,000 to N40,000 whenever his commercial Volkswagen bus with the registration number BDG149 XK, had issues.