A mom has shared a heartbreaking video of her 9-year-old son born with special needs shedding tears and talking about wanting to commit suicide due of constant bullying. 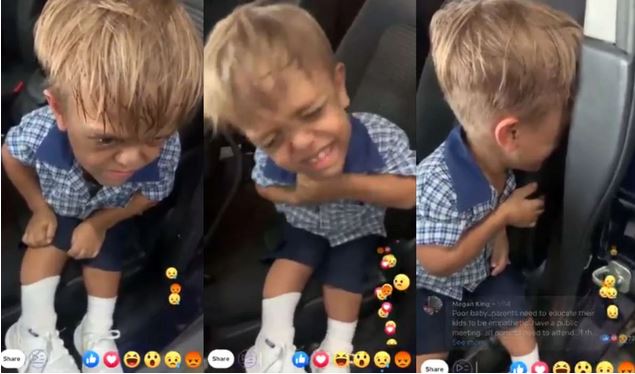 A 9-year-old boy who was born with special needs says he wants to kill himself, he wants to commit suicide because of constant bullying everywhere he goes.

The mother of the 9-year-old boy was broken after she got to his school and found another school mate bullying him which led to the boy breaking down in tears saying he wants to commit suicide.

His heartbroken mother  who can be heard crying at the background went live on her social media page to bring awareness on the effect of bullying and how her son and the entire family have had to go through some very emotional times. She explained how she is always very watchful of him because he has been placed on suicide watch.

The little boy could be heard saying, “i will die, i want to die” while reaching for his throats with his hands.

This is so sad. 9 year old wants to commit suicide due to bullying 💔💔pic.twitter.com/DOM1N7pPNf

This has sparked several reactions on social media, see a few below.

Parents of bullies dont take seriously how much damage their children inflict on other kids. Sometimes its just a joke to them but their victims are living a life of horror. When will parents of bullies ever take responsibility for this nonsense? – @Phislash

It’s all fun and games until people kill themselves because you are just a cruel person. – @njabulo_musa

This is so heartbreaking. Also as a parent you always have to be strong and always defend your child.

you don’t have time to be weak, it will eventually affect your wellbeing too because we do have feelings at the end of the day. We are human.

Well imagine someone you gave life to telling you “mommy/daddy I don’t want it anymore” because they’re hurting so much. That’s heartbreaking. You feel helpless. – @EmeraldAerion

Side note: Parents-your child probably has someone in his/her life with a disability that she might have questions about. No matter what the situation,its important to be prepared and to addrss your child’s curiosity about disabilities as openly and honestly as you can. EDUCATE! – @Vince_Monak

This beautiful boy is why we ALL need to do something about any form of bullying. Quaden: You are a beautiful boy & so very worthy of everything. Your beautiful mum will help you survive & become a shiny soul who will help others who are being hurt as you are. You are loved X – @trampanya