Nigerians have frowned at attempts by the National Assembly to confer immunity on its principal officers. 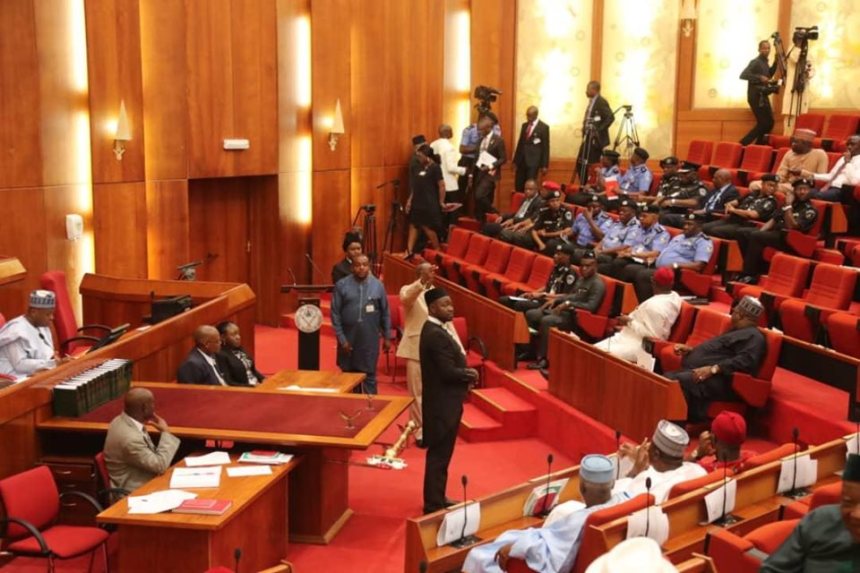 Senate
Nigerians have rejected a bill seeking to amend section 308 of the 1999 Constitution to provide immunity for presiding officers of the National Assembly including the Senate president, speaker, deputy Senate president and deputy speaker yesterday scaled through second reading at the House of Representatives. Section 308 of the country’s constitution provides immunity to the president, vice president, governors and their deputies.
The proposal is to amend the section to accommodate the presiding officers of both national and state assemblies. Daily Trust reports that thunderous rejection is trailing the proposal. This is the second time that the proposal would be made during President Muhammadu Buhari’s administration.
At the eighth assembly, a similar bill sponsored by the then House Minority Leader, Leo Ogor did not see the light of the day.
The proposal, Daily Trust reports was against item five on the 2014 manifesto of the All Progressives Congress (APC) that reads, “Amend the constitution to remove immunity from prosecution for elected officers in criminal cases.”
The parliament is populated by the APC members. Section 308 of the constitution reads: (1) (a) “no civil or criminal proceedings shall be instituted or continued against a person whom this section applies during his period of office,” while (b) provides that, “a person to whom this section applies shall not be arrested or imprisoned during that period either in pursuance of the process of any court or otherwise,” and (c) says “no process of any court requiring or compelling the appearance of a person to whom this section applies shall be applied for or issued.”
Consequently, subsection (3) provides that “This section applies to a person holding the office of President, or Vice-President, Governor or Deputy Governor; and the reference in this section to ‘period of office’ is a reference to the period during which the person holding such office is required to perform the functions of the office.”
At plenary yesterday, the bill, sponsored by Rep Olusegun Odebunmi (APC, Oyo) tagged, “An Act to Alter Section 308 of the Constitution of the Federal Republic of Nigeria, 1999 to Extend Immunity to Cover Presiding Officers of Legislative Institutions,’ scaled second reading. Odebunmi, argued that the immunity bill was to protect the presiding officers from distraction and to make them to fully concentrate on their legislative duty without compromise. The Speaker, Femi Gbajabiamila urged the sponsor to make the implementation of the bill “futuristic’’.
He said being one of the presiding officers, he will not be the judge in his own case, and he was not willing to benefit from the privilege of the bill when passed into law.

An elder statesman, Chief Chekwas Okorie told Daily Trust in a telephone chat yesterday that the lawmakers would likely use the immunity if conferred on them to perpetrate “evil.”

“It is a move in a very bad taste and it will be unfortunate if the National Assembly will take undue advantage of the fact that they are the lawmakers to do to themselves what Nigerians would not want, because there is no need for that,” he said.

“They are compounding Nigeria’s problem because the perception about National Assembly is very negative. At a point, they were rated very high in terms of corruption profile.

This new step means they are trying to cover up some things. As it is now, they can even do anything they like whenever they enter their chamber,” he said.

Reacting, Auwalu Yadudu, a professor of law, said the bill would not pass going by the passion of the public against it.

Prof Yadudu said it was “totally unjustifiable” and would end up as an exercise in futility. He added that even the immunity provided for the executives by the constitution has been raising questions, as such he strongly believes that the amendment would not be successful, saying there was no reason for it.

Another professor of law, Yemi Akinseye-George (SAN), said the bill was not appropriate and “is a fraud on the people of Nigeria. At this moment, we are supposed to be getting away from the whole idea of immunity and not enlarging the immunity for any category of public officer.”

Constitutional lawyer, Sebastine Hon (SAN) said immunity has created a lot of problem for the country and should be rejected.

He explained that being a constitutional amendment, a majority of the state assemblies, would have to pass it for it to become a law, a condition he said might not be difficult to achieve since it would benefit their leadership.

The Executive Director, YIAGA Africa, Mr. Samson Itodo, told Daily Trust that the news coming from the National Assembly these days are depressing.

“Are we legislating to improve governance and accountability or we are legislating to protect a few in power? This bill is retrogressive and self-serving. At a time, we are advocating for abolishment of immunity privilege for all public officers, the National Assembly is passing a bill to provide immunity for presiding officers. There are better ways to protect the institution of the legislature and this is definitely not one of them,” Itodo said.

Also, Mr. Jaye Gaskia, the Executive Director, Praxis Centre and Convener, Take Back Nigeria Movement (TBNM) said, “In reality the amendment that is needed is the one that removes immunity for state chief executives, and not one that draws the leadership of the legislature under the cover of this banner of darkness,” Gaskia said.

On his part, the Convener, Good Governance Team (GGT), Mr. Tunde Salman said immunity for presiding officers of national and subnational legislatures will be unneeded roadblocks for the current national anti-corruption campaign drive, wondering what they are afraid of.

Salman said, “After all, the immediate Senate, President, Dr. Bukola Saraki, was prosecuted by EFCC as a sitting presiding officer of an arm of the National Assembly? I will therefore strongly kick against any law protecting anyone from being investigated and prosecuted. In fact, immunity for sitting governors should be scrapped. Only that of President can be reasonably justified to some lesser extent.”

Also, the Executive Director, Resource Centre for Human Rights and Civic Education (CHRICED), Dr.  Ibrahim M. Zikirullahi, said it is saddening that Nigeria has degenerated to this level of irresponsible law-making.