A fake police officer has been nabbed after being caught escorting contraband good in the city of Lagos. 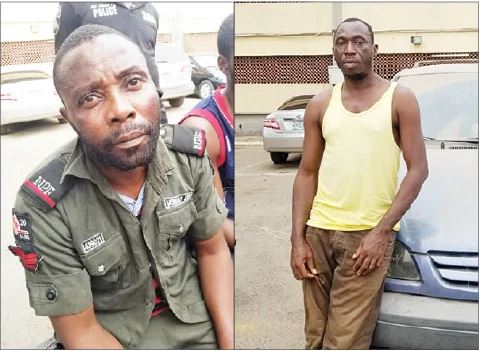 According to a report by Punch Metro, policemen have arrested a fake cop, Monday Job, for allegedly posing as a riot policeman to escort people conveying contraband goods from Cotonou in Benin Republic to Lagos State.

The Police Public Relations Officer in the state, Bala Elkana, said policemen on duty arrested the suspect, adding that during interrogation, he could not state the squadron he was attached to.

He added that Job would be charged for the crime.

Elkana stated, “On February 10, 2020, around 8am, policemen on enforcement of the ban on motorcycles in restricted areas arrested one Monday Job, 32, at Oshodi, while riding a motorcycle and fully dressed in riot police uniform. A close look at his name tag and badge gave room for further probing. He could not give a satisfactory account of himself and the squadron he was attached to. In the course of investigation, he confessed to being an impersonator.

“It was revealed that he had been wearing the uniform to commit criminal activities, including the illegal escort of contraband goods from Cotonou to Lagos, escorting of vehicles from Lagos to other parts of the country, intimidating, harassing and extorting money from innocent members of the public while claiming to be a riot policeman. An investigation is ongoing and the suspect will be charged when the investigation is concluded.”

In another development, a commercial cab driver, Matthew Tokeme, has been arrested by men of the Lagos State Police Command for allegedly using his Sienna vehicle with number plate APP 488 FH to rob his passengers of their valuables in the state.

PUNCH Metro gathered that Tokeme perpetrated the crime in connivance with three others, who are still at large.

The father of four met his waterloo when he and his gang members robbed a passenger, who memorised his number plate and supplied the information to the police for investigation.

Policemen traced the number plate to the house where he was arrested.

Elkana said Tokeme would be charged, adding that efforts were on to arrest the fleeing members of his gang.

The PPRO stated, “On February 3, 2020, around 5am, information received from members of the public revealed that some armed robbers were sighted along the Agidingbi Road, Ikeja, operating in a Toyota Sienna with number plate APP 488 FH, robbing unsuspecting victims of their valuables.

“On the receipt of the information, operatives of the RRS, who had been on the lookout for the said vehicle, swung into action. The vehicle was intercepted and one Matthew Tokeme, 50, who is the leader of the robbery gang and also the owner of the vehicle, was arrested. He confessed to being the leader of the ‘one chance’ robbery gang. An investigation is ongoing to apprehend the other gang members at large.”

When asked how he got the vehicle, Tokeme was quoted to have said, “My friend, who is based in Germany, bought the car for me to be using for commercial purposes. He bought the car for me because he realised that my business was not going on well. But I started using the car for ‘one chance’ and was operating between Abule-Egba and Ijaiye from 5am to 6am.

“I started this operation about two weeks ago and I have collected a laptop and phone from the people I robbed. I sold the phone for N5,000 and the laptop for N20,000.”

Meanwhile, one Godwin Michael, 23; and Kazeem Abiodun, 30, have been arrested for allegedly robbing traders at the Agbara Market on the Lagos-Badagry Expressway.