Busty Nigerian actress, Ronke Odusanya has talked about how she used to wear three bras to run in secondary school. 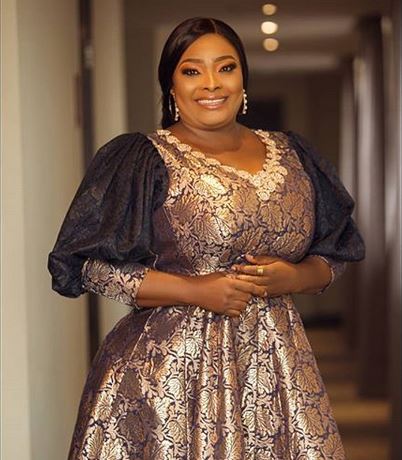 In an exclusive interview with Legit.ng on February 27, 2020, Nollywood actress, Ronke Odusanya, spoke a bit on her upbringing, her career as an actress and many other things.

While speaking on her physical features, the actress recounted an experience she had while in secondary school. The film star said that when she was still a teenager in school, she used to wear three brassieres because of her bust.

She said: “When I was in secondary school, the only sports I could do then was hurdles and then I was slimmer but I was a bit busty. Because it was a girls only school, we were always very shy when boys came. So on inter-house sports day, I will have to wear like three bras.”

Speaking further in the interview, Odusanya shared her opinion on cosmetic surgery and whether she would be open to going under the knife to alter her physical features.

The new mother said that she is a realist and would not like to lie. She said that even though God has made everyone beautiful, we begin to change physically as a result of our lifestyle.

The film star also said that she sees nothing wrong with undergoing cosmetic surgery if one can afford it. She also said people do it and she cannot say it is a bad thing.

Ronke also said that people should however be careful not to undergo the surgery with quack doctors.