A boa has been spotted wrapping itself around a helpless cat in an attempt to crush it. 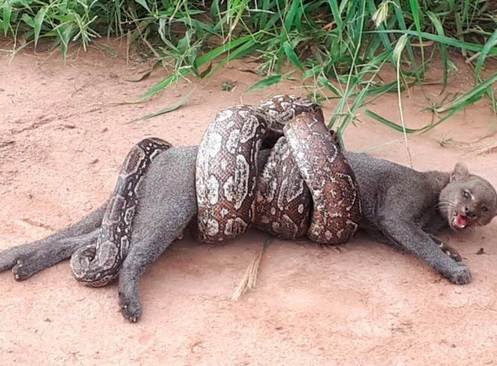 A footage has surfaced showing the dramatic moment a gigantic boa constrictor wrapped itself around a wild cat attempting to crush the ribs of the animal and swallow it.

The incident took place in the town of Las Lajitas, Salta, in north west Argentina, when two men spotted the animals battling it out in the middle of the road.

In the video, the massive snake can be seen coiled around the jaguarundi, a small wild cat in the middle of a road inbetween the jungle.

In the video the cat can be seen crying for help as it tried to free itself from the snake's coils, but the snake had the howling cat firmly wrapped.

A forest ranger who shared the video, said passersby had to get involved in order to free the cat.

"Between two people they managed to unwrap the boa and release the animal," recalled Sole Rojas,

"It is always a risk, but people in the area know how to manipulate wild animals and this boa is not venomous."

He explained that four people had to be drafted in to complete the rescue operation and separate the two animals. The feline was then eventually freed from the snake's coils, according to Rojas.