A couple who have been together for a very long time have been separated forever by the deadly coronavirus. 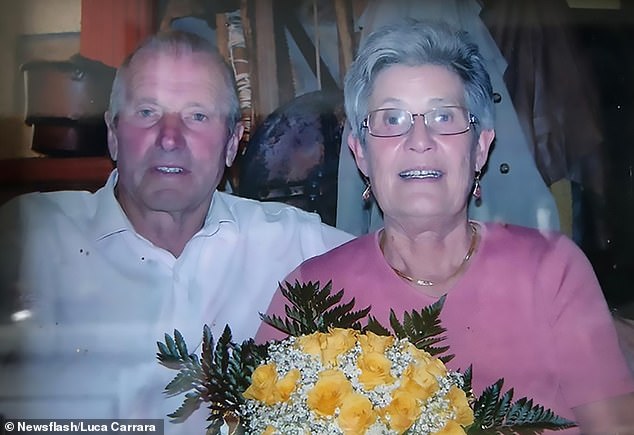 Pictured: Severa Belotti, 82, and Luigi Carrara, 86, from Albino, Bergamo, who died from the coronavirus just hours apart in northern Italy on Tuesday
A lovely couple in Italy who have been together for 60 years have now died just two hours apart on Tuesday from coronavirus.
According to Dailymail, Severa Belotti, 82, and Luigi Carrara, 86, lived in the town of Albino, in the northern Italian province of Bergamo.
Their son, Luca Carrara, claims they 'died alone' after he was unable to hug them following their deaths.
He told a local newspaper that the couple spent eight days locked at home with a fever of 39 degrees, without medical assistance.
Luigi, the father, was taken to Bergamo hospital on Saturday and Luca's mother, Severa, was admitted to the same facility on Sunday.
One died at 9.15am and the other at 11am, less than two hours apart.
Luca told local newspaper Corriere della Sera that they 'died alone' in the facility as he was unable to say goodbye.
He added: 'Your loved ones stay alone and you cannot say bye, hug them, trying to give some comfort'
The son also wrote a touching message on social media which read: 'Hi mum and dad, this bad virus made you leave the same day, will you keep bickering up there too? I think so, but then everything ended up in a hug'.
Luca, who is currently in quarantine with his family, complained about the Bergamo Hospital saying 'they (the staff) do not know where to put patients, probably because doctors are doing a selection and letting the elderly people leave'.
He said his father had no pre-existing medical conditions, saying 'my father did not know what going to the doctor was' and said that 'the truth is that this is not the common flu, it is a terrible flu and if you end up in hospital, you leave dead or alive'.
The son says he was not able to see his parents' bodies after their death because they were taken to the cemetery and will be cremated within days because 'there are too many dead people'.
There have been 12,462 confirmed cases of COVID-19 in Italy, the most anywhere outside of mainland China, and 827 people have died.
Top Stories