Some thieves who were dressed as coronavirus doctors have reportedly broken into people's homes. 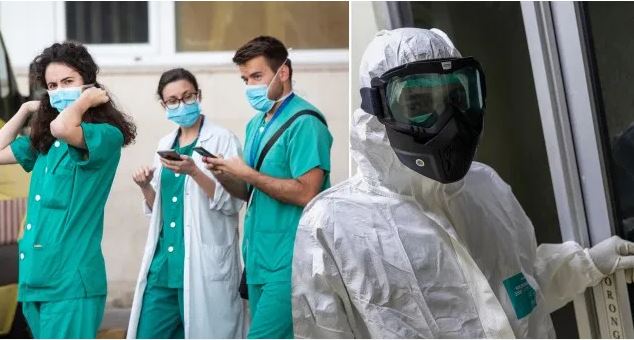 Pensioners are being warned to watch out for thieves posing as coronavirus doctors to break into their homes.

Police in Barcelona issued an alert to vulnerable people after two women and a man dressed in white coats rung a bell and pretended they were carrying out medical checks.

The resident suspected they were not real doctors and did not let them enter the property. He called the police but the suspects fled before officers showed up.

Catalan police have since launched a warning to the public not to be deceived by similar fake medics.

Any patients isolating themselves at home amid the global outbreak of coronavirus were told they will receive a warning from their doctors before any visit.

The death toll from coronavirus in Spain nearly doubled to 84 today and the number of cases rose to nearly 3,000. Deaths in Italy topped 1,000, with more than 15,000 testing positive.

Reports from Spain say the Champions League and Europa League could be immediately suspended, following the news that Real Madrid’s players had been quarantined as a precautionary measure after a member of the club’s basketball team tested positive for coronavirus.

Sweeping travel bans around the globe have started walling off countries and even entire continents, in a desperate bid to halt the spread.

Donald Trump’s announcement to ban flights from Europe – excluding UK and Ireland – came as a shock across continent.

The European Union slammed Trump’s ‘unilateral’ decision, declaring the virus a ‘global crisis, not limited to any continent and it requires cooperation rather than unilateral action.’

Within hours, even the European Union’s passport-free travel came into question, with guards in places that had been without borders for more than a decade and airports shut down.

The virus detected three months ago in China has produced crippling outbreaks in Asia, Europe and the Middle East, ignited global financial panic and in the last week has seen dizzying developments erupt by the hour.

European soccer leagues, American basketball tournaments, school terms for millions of students, weddings, baptisms, funerals, nightlife, culture high and low – all fell by the wayside with a swiftness that is becoming increasingly difficult to grasp.

Over 127,000 people in more than 110 countries have been infected. The vast majority are in just four countries: China and South Korea – where new cases are declining – and Iran and Italy, where show no sign of slowing.

More than 4,700 people have died worldwide.

Reports from the country say the Champions League and Europa League could be immediately suspended, following the news that Real Madrid’s players had been quarantined as a precautionary measure after a member of the club’s basketball team tested positive for coronavirus.