The inferno, which started around 9.45 a.m. from one of the flats in the building, was allegedly caused by an electrical fault. 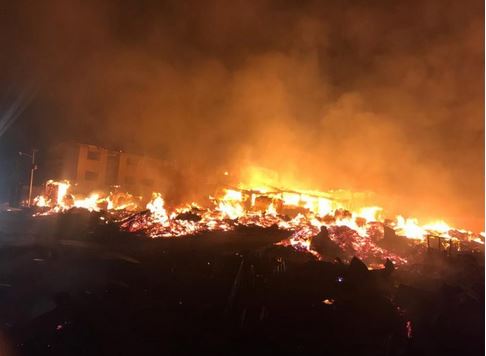 According to a report by PM News, fire on Thursday gutted down a section of a three-storey residential building located along Moore street by Bida road in Onitsha, Anambra State.

The inferno, which started around 9.45 a.m. from one of the flats in the building, was allegedly caused by an electrical fault.

An eyewitness said that residents within the neighbourhood made frantic efforts to quench the fire before the arrival of fire fighting officials.

“The Fire Service later arrived and, in collaboration with officers from the Red Cross, were able to put out the fire.

“Thank God for the intervention; the fire was already extending to the main market,” the source said.

Confirming the incident, the spokesperson of the Police Command in the south-eastern state, Mr Haruna Mohammed, said that no life was lost and no casualty was recorded.

“The situation was brought under control and the entire area was cordoned off by the Police and sister agencies, to prevent looters from taking advantage of the stampede to wreak havoc,” Mohammed said.

He explained that preliminary investigation had revealed that the fire resulted from a power surge.

“The Commissioner of Police, Mr John Abang, has ordered for a discreet investigation to ascertain circumstances surrounding the incident,” he said.