The rise in criminal attacks taking place in Lagos and Ogun state has been traced to the ongoing lockdown in the country. 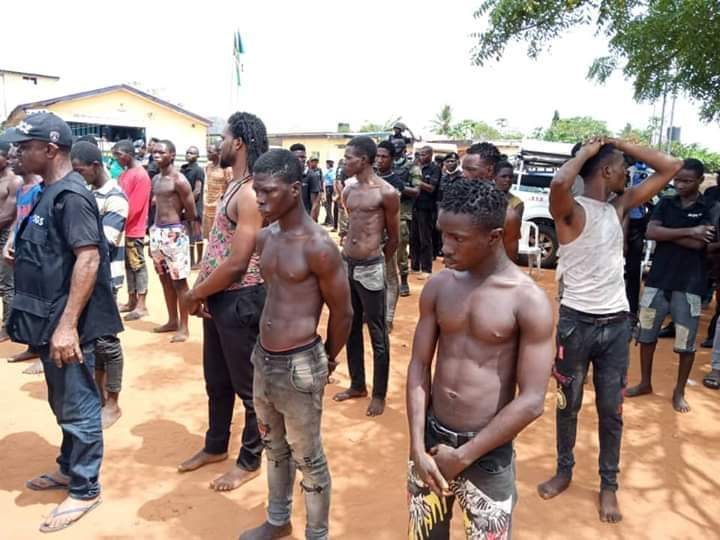 Criminasl arrested during COVID-19 lockdown terrorizing Lagos and Ogun residents
In the last few days, residents of some Lagos and Ogun communities have been threatened by a sudden raid by armed robbery gangs. The robbers with ages ranging between late teens to early 20s are said to have attacked with locally-made guns, knives and machetes, breaking down doors and robbing residents of their possessions. Cases have even been reported of severe assaults and rapes carried out by these criminally-minded groups.
The incidents which were first reported in Ogun communities quickly spiralled to neighbouring Lagos communities forcing the residents to raise alarm to the government and the Police. On social media, the hashtags #LagosUnrest and #OgunUnrest became dominant trends with residents using the means to allay their fears to the entire public of their situation. Viral videos soon emerged on the internet showing neighbourhood vigilantes and youths wielding sticks, iron rods and burning tyres while keeping vigil to ward off and protect their neighbourhoods from the dare-devil robbers, as they complained of having no help from the Nigerian Police.
Even though the Police in Lagos, however, claim that majority of the reported cases are false alarm raised by panicking residents and that several calls to their hotlines were later found out to be prank calls, the heightening insecurity in the country can not be underlooked nor underestimated.
Why the sudden spike in armed robbery during this lockdown, one may ask. Could it be related to the imposition of the mandatory sit-at-home order?
Lagos and Ogun, alongside the Federal Capital Territory, Abuja were put under federal lockdown by the order of the Federal Government to contain the spread of the Coronavirus which was fast gaining high numbers in these places.
According to residents, these ruthless gangs simply identified as Awawa Boys and One Billion Boys. Some were even identified to belong to cult groups going by ludicrous names such as Sahara Boys, Federal Boys, Ilena Boys, Marindoti Boys, Lemon Boys. It may not be far from the truth to suggest that criminals have taken advantage of the lockdown to perpetrate evil in these communities.
When the government announced the lockdown, it did so with the promise to make available palliatives aimed at relieving some of the econom­ic pain through the lockdown period. Very few people have gotten relief materials from the Federal government and those that even got anything at all from the State governments complained that the gesture was too little to sustain them for more than a day. Also, cash disbursement that was promised to " the poorest and most vulnerable in the society" seems not to have taken effect up till now.
Most Nigerians live on a daily wage or a subsistence lifestyle where they fend from whatever they are able to make of the day to survive. This cycle is what many routinely undergo. So, imagine what to them, might turn out to be an option if the lockdown continues to prevent them from sourcing for their daily bread in the legal way which they have been accustomed to.
We can't run away from the fact that people are getting hungry and even angrier, which is not to say is enough reason to rob others, but there is little you can do to dissuade a man who is hungry and has mouths to feed from going the extreme when you have prevented him from fending for himself the legal way.
It has been three weeks since the lockdown commenced and no ending in sight. Without the necessary palliative measures to help cushion the economic effect of staying at home with no source of income, it would come a time when people will revolt and care less of getting infected by the virus but choose to go out to survive starving to death.
By Victor Enengedi
[email protected]
Top Stories