Urban Or Rural Lady: Who Makes A Better Wife?


Who really makes a better wife? Is the urban lady who has spent years in the city or the rural one who lives in the village? 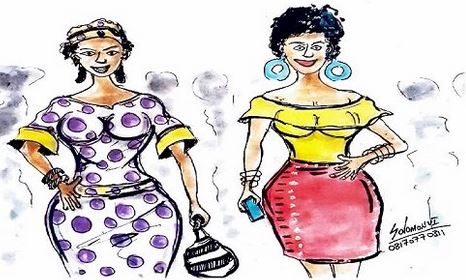 Before I relocated to my present abode, I once lived in an area where a hospital was located. The hospital was the very ‘classy’ type if you get my drift. Never in my years of residing in that area did I see any patient trekking to the clinic. The calibre of patients who patronized the hospital was either chauffeur – driven or those who drove themselves to the hospital in porche cars, of course.

You can then begin to imagine the type of doctors working in the hospital. They were very polished, trendy and happy– go-lucky set of doctors.

I must not forget that majority of them were young and handsome, of course, especially when you see them in their white jackets and stethoscopes casually hanging on their shoulders.

Of all the doctors who worked there, the one that really caught my attention was Dr. Amos. The guy was stylish, handsome indeed, but he was randy.

Dr. (Randy) Amos practically slept with all the nurses and a handful of patients. People were not too quick to judge him because they reasoned he was still single, and that perhaps he was still searching for the ‘Miss Right’.

Well Dr. Amos had a joker for everyone who prayed for him to at least settle and perhaps to make a home with one of the nurses who he was being seen with.

He sampled and sampled and at the end of the day, when it was time for him to get himself a wife, he travelled to his hometown and got himself a wife! Everyone was dumbfounded when he introduced the lady we thought to be his sister or maid as his wife.

It is needless for me to state how heartbroken a lot of the nurses he used and dumped were. As a matter of fact, some of them left the employ of the hospital. They could not bear the shame. They said if he had chosen one of them, they would have accepted it as fate.

But to dump every city girl he had dated, and gone for a ‘bush meat’ (according to them) was simply unthinkable. For me, I still believe that love is where you find it, but just as a matter of curiosity, does it mean that ladies in the countryside are better than city dwellers?  I am also aware that majority of my eastern brothers still indulge in that act till tomorrow.

What is about the rural girls that urban girls don’t have? Do men feel the urban girls are too exposed or too independent? Does it have anything to do with prowess in bed? Do men of these days still prefer, ‘Yes sir’, ‘Yes sir’, ‘bags full’ kind of girls? Because Dr. Amos’s story is very recent one, are village girls prettier? Do they cook better? Are they better housekeepers? Do they make better housewives and others?

I am aware that urban girls of these days are not as timid as they seemingly were in the past. In fact, when most of the urban girls visit their country home, feeling cool, wearing their wares and hairdos, they will be shocked to find out that their so-called trendy clothes are already outdated as the ‘home girls’ are spotting trendier wares.

In fact, a friend recently travelled home to see her aged mother, it was during that visit that an old friend she accidentally ran into introduced to her a herbal soap that she can use to wash and tighten her ‘parts’ so that when a ma ‘meets’ her, she would feel like he is meeting a virgin.

In the villages these days, the type of girls that stare downwards or look away when a man makes a direct pass at them are fast gone. I also recall an old childhood friend of mine, who once dated a guy form the eastern part of the country for close to seven years of her life.

This guy went further to give her an engagement ring, which she wore conspicuously, scaring all prospective suitors away. She was very faithful to her until the day he travelled home to bring home the wife his mother had earlier arranged for him.

Her fiancée kept her in the dark for close to eight months after bringing the lady home to Lagos. He finally let the proverbial cat out of the bag when my friend persistently insisted on retrieving the spare key he had earlier taken back from her with no cogent reason.

He claimed that his mother had arranged the wife on his behalf years before he was even told of the lady’s existence. He also claimed that he could not afford to disobey or hurt his mother’s feelings. My friend’s broken heart is yet to be taken care of even two years after the eastern ‘bros’ dumped her for his ‘home girl’.

I really wonder why this is so.  It really beats my imaginations. Don’t get me twisted.  I am not in any way trying to downgrade my urban sisters by any chance, far from it.

I just feel that lady’s location is based on privileged and sheer geography, I do not think it is right to date and dump a city girl for whatever reason and run home to pick a wife. A lady is a lady. There should not be any basis for competition. If you date an urban girl, and it works for you, please marry her.

Same should go for a city girl. If an urban lady is good enough to dine, wine and sleep with, why can’t you just take her to the altar? Or what do you think?