Nigerian Man Rapes 17-year-old Girl After She Refused His Love Advances, Attempts To Kill Her (Photo)


A man has forcefully had carnal knowledge of a 17-year-old girl who rejected his love advances. 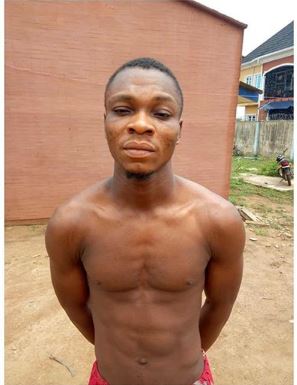 Godday Robinson
A 28-year-old man, Godday Robinson has been arrested by men of the Ogun state police for alleged raping, stealing, and attempting to murder a 17-year-old girl.
The incident occurred on April 22 in Agbara area of Ogun state. The suspect was arrested following a report that a young lady was lying unconscious in a ten feet deep pit in a nearby bush.
Upon the report by the good samaritan, the Agbara Area Commander detailed his men to the scene where the young lady was rescued and taken to the hospital.
Upon regaining consciousness, the victim explained that while she was coming from work, the suspect, who had been making advances at her, accosted her, capitalized on the isolated nature of the area and dragged her into the bush where he forcefully raped her.
The suspect was also said to have dispossessed the young lady of her phone valued at N85,000. Not done, he allegedly strangled her until she passed out momentarily.
Thinking that she was dead, he dragged her further into the bush and dumped her inside the pit, but after some time, she came back to life and started shouting for help.
On the strength of her explanation, the area Commander ACP, Bolanle Muritala, ordered the arrest of the suspect. On interrogation, he owned up to the commission of the crime but blamed it on the devil.
Top Stories