A video of the late Niger APC chairman, Bin Adam has emerged showing him talking with his wife shortly before his death. 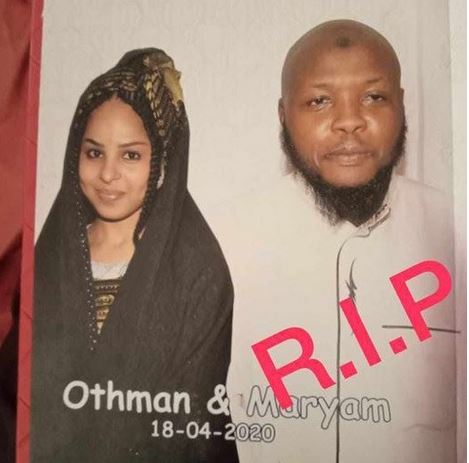 A video of Mallam Sheriff Othman Bin Adam, the Zone C Zonal Chairman of the All Progressives Congress (APC) in Niger state, who died on April 29,  has emerged.

The man, it will be recalled got married to a new wife on April 18.

Recall the zonal chairman died in Kaduna after a brief illness,11 days after his wedding to his late wife's younger sister, Maryam. Read here

The marriage was reportedly arranged by the family of Bin Adam's late wife.

It was gathered that Bin Adam died suddenly shortly after exchanging playful banters with his young bride Maryam. A video of the couple circulating on social media, showed the deceased seated in the living room of his Kaduna residence, while having a conversation with his wife.

“I have a headache. I actually pity myself,” he said in Hausa.

Maryam then asked him why he was looking fairer, teasing him on whether he had applied some powder.

The deceased who hails from Sahon Rami, Mashegu local government area of Niger State, has been buried in accordance with Islamic rites.
Until his demise, he was a one time APC Youth Leader from 2014-2018 and became APC state zonal chairman in 2018.

Below is the video of the Maryam teasing Bin Adam shortly before his death and another one of her weeping uncontrollably as her husband's corpse was being taken away for burial at the Unguwar Sarki cemetery.