The meeting, via Zoom, an online video service, which started around 9am had barely lasted a minute when the pornographic images popped up. 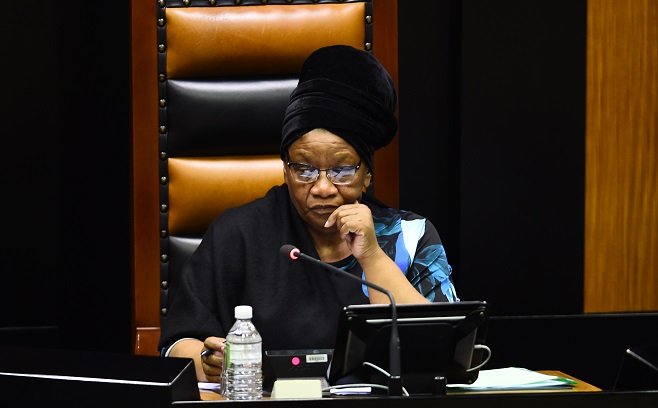 Thandi Modise, speaker of the parliament

There was drama on Thursday after a virtual meeting involving South African lawmakers was interrupted by hackers who flooded the video call with pornographic images.

According to Times Live, the meeting, via Zoom, an online video service, which started around 9am had barely lasted a minute when the pornographic images popped up on the screen of members of the parliament’s programming committee.

The hackers were also said to have hurled racial and sexual words at Thandi Modise, speaker of the parliament, who was chairing the meeting.

More of the images and sexually offensive videos were said to have appeared on the screen, forcing the meeting to a halt after about four and a half minutes.

The ugly incident was said to have occurred about the same time when Natasha Mazzone, chief whip of Democratic Alliance (DA), the country’s opposition party, at the parliament, was discussing the modalities for holding virtual meetings.

The development had taken Modise, who had earlier expressed reservations about the parliament holding its meeting via Zoom, aback.

“This is exactly what I said about Zoom!,” she was quoted to have said.

The meeting was said to have restarted few minutes later with another Zoom link.

The development comes amid rising insecurity concerns over the use of Zoom for meetings by organisations and government institutions.

With the coronavirus pandemic, which has fizzled physical gatherings, several businesses and government agencies have turned to video call platforms for  virtual meetings.