A musician who recently clocked 25 has flaunted his wealth while boasting about his achievement. 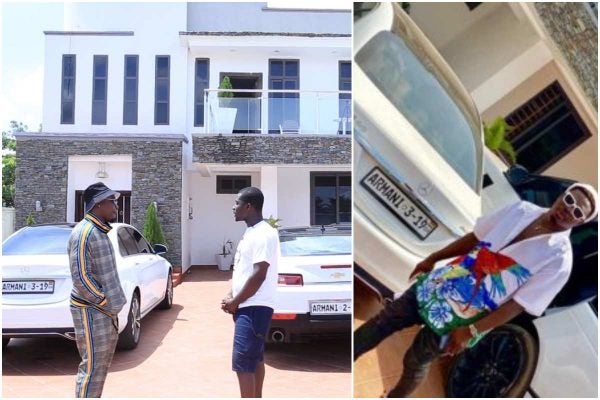 Rapper, AMG Armani
Young Ghanaian rapper, AMG Armani has boasted after showing off his mansion and cars on social media.
Armani who is signed to AMG Business record label recently celebrated his birthday praised himself over what he has attained within a short period of time.
At the age of 25, the singer is blessed with a plush house and all white coated Benz and Chevrolet cars.
He owns a white-dominated colour mansion that contains five bedrooms, there is also an in-house studio where he mostly does his recordings.
During an interview with Zion Felix, a Benz C300 and Chevrolet, all-white were some of the luxurious vehicles spotted at the residence of Armani, he also owns a white Toyota Venza.
Being in the Ghanaian music scene for about two years now, AMG Armani said he acquired these properties before he started his music career.
AMG Armani disclosed he has been through a lot before he reached where he is now.
He recounted how he lived in a single room with his parents and siblings who were about nine when growing up.
Top Stories