Akinkunmi, a South-West leader of the Ogboni Fraternity, was allegedly shot dead by some yet-to-be identified assailants at his hotel. 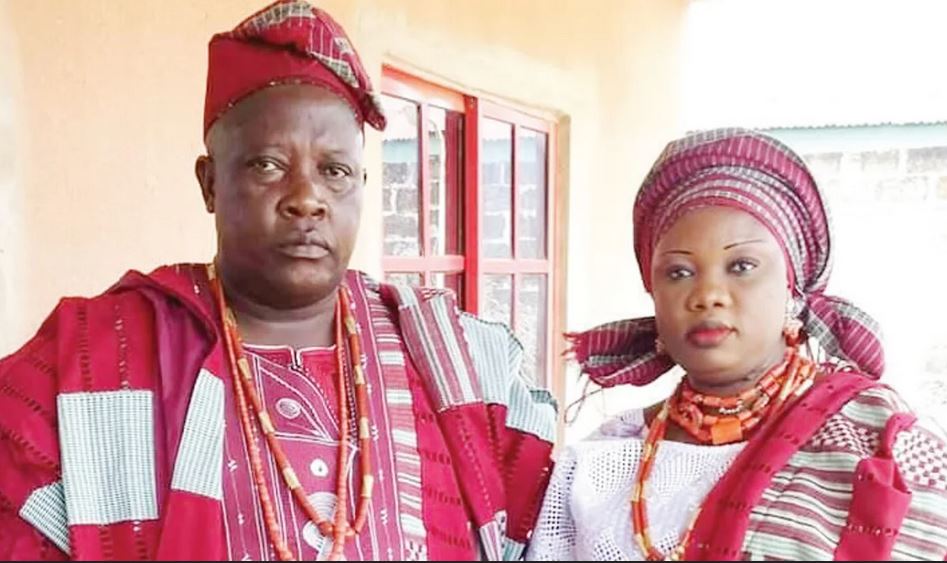 The late Akinkunmi and wife

According to Sunday PUNCH, Mrs Toyin Akinkunmi, wife of Chief Stephen Akinkunmi killed last week in Ore, in the Odigbo Local Government Area of Ondo State, is currently troubled at the moment apart from mourning her husband’s death which has left her sad.

Akinkunmi, a South-West leader of the Ogboni Fraternity, was allegedly shot dead by some yet-to-be identified assailants at his hotel; Stephen Hotel, Ore, last Thursday.

He was said to have been killed after refusing to obey some hoodlums who ordered him to enter his car. The bandits were said to have immediately fled the scene after killing him.

It was gathered that efforts to save Akinkunmi were futile as the popular hotelier passed away before reaching the hospital.

Sunday PUNCH gathered that two people had been arrested by the state police command in connection with the incident. The two were the deceased’s son, who is the manager of the hotel and another lady said to be in the hotel when the incident occurred.

After Akinkunmi’s death, there had been allegations and counter-allegations between one of his wives, Toyin, and members of her husband’s family. The wife accused the family of planning to take over the husband’s property and drive her out of the house.

Toyin, who claimed to be the senior wife of the deceased, alleged that immediately after the demise of her husband, his family, on the order of the family head, Mrs Funmilayo Kokumo, started to threaten her.

She also alleged that said Mrs Kokumo ordered some of the deceased’s brothers to lock up his office and pack vital documents from the office to frustrate her and her children out of the house.

Mrs Akinkunmi also called for justice for her slain husband whom she described as caring and loving. The widow called for a thorough investigation into the matter to fish out the perpetrators.

She said, “I was called that my husband had been attacked by robbers and that he was rushed to the Trauma Centre, Ondo town. Later, I was told that he had died. Some people were arrested and those arrested at the hotel are my step-son, who is a manager of the hotel. I know that those that killed him had lodged in the hotel for some days because my husband used to query his son about their presence in the hotel. But he would tell my husband that there was no problem. I want the security agencies and the government to help arrest my husband’s killers. I want justice.”

Toyin, who said she was married to the deceased for over 20 years, said he did not have any issue with anybody before the incident.

She added, “He didn’t have issues with anybody but on Monday before his death, his sister (Mrs Kokumo) sent him a message. The message really annoyed him. When he showed it to me, I had to calm him down. When he died, it was from the Ondo hospital that she (Kokumo) called her younger brothers and one of the sons of the deceased that they should go and pack everything and every document in the deceased’s office.

“She also called me on the phone that I should vacate the house that she was told that I was crying too much and should leave the house. I told her it was my husband’s house and I cannot leave the house. The family has locked all the offices and went to the new house he was building and told the workers to stop work. They are threatening me every day.”

Toyin stated that she reported the matter to the police and was asked to write a statement. According to her, the police invited some of the family members mentioned in the matter but only Kokumo went to the police headquarters in Akure on behalf of others.

However, when our correspondent contacted Kokumo, she denied the allegations, saying the widow was maligning her name on the matter she knew nothing about. She described the deceased as a loving brother who was precious to her and wouldn’t do anything to destroy his family after his demise.

She stated that she had a cordial relationship with her late brother and his wives, expressing disappointment over the claims of her sister-in-law.

“As my younger brother’s wife, I don’t have issues with her or any of my brother’s other wives. Truly, I am the eldest child of our mother, I didn’t have problem with the deceased. He was a precious brother to me. It’s his wife that had been saying untruths about me. She said many things against us on social media, but I have left everything to God to judge.”

The state Police Public Relations Officer, Mr Tee-Leo Ikoro, who confirmed the arrest of the two suspects in connection with the killing, said the command had begun an investigation into the incident.

He noted that the command was not interested in the family tussle but on how to arrest Akinkunmi’s killers and bring them to justice.

Ikoro said, “We are after the perpetrators and we will ensure they are brought to book.”