Following the bloody killing of innocent Nigerians by Boko Haram, a former vice president of Nigeria has reacted. 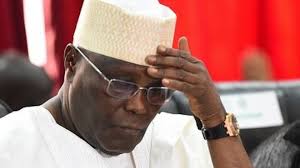 Atiku Abubakar
Former Vice President, Atiku Abubakar, has broken his silence after dreaded terrorists invaded villages in Borno and killed at least 81 innocent persons.
Recall that we reported that the attack took place in Faduma Kolomdi, a nomadic village located 35 kilometres in the north of Gubio, the headquarters of Gubio Local Government Area.
A survivor told Governor Zulum of Borno State during his condolence visit that 81 residents were killed during the attack on Tuesday with 13 persons injured and seven others, including village head were abducted.
Reacting, Atiku called on the government to step up security in the Northeast even as he consoles the families of the victims.
His tweet read: “I am saddened by the despicable massacre of innocent Nigerians in Faduma Kolomdi in Borno State.
“There’s a compelling need to step up security and intelligence in the Northeast which is still an endemic region of terrorism.
“My deepest condolences to the families of the dead.”
Top Stories