In the past few weeks, customers with pending issues on their accounts have had horrible experiences trying to access the banks and rectify the issues. 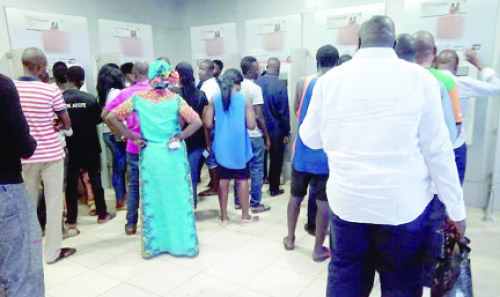 Banks all over the country are experiencing unusual surge in patronage. It is expected and Abuja banks are no exception. The surge surfaced after the Federal Government partially relaxed the lockdown imposed to curb the spread of the novel coronavirus pandemic.

Customers are now spending hours at the few bank branches opened to operation. In the past few weeks, customers with pending issues on their accounts have had horrible experiences trying to access the banks and rectify the issues.

At first, only few bank branches were open for business with many customers kept outside their gates. They were allowed into the banking hall in batches to abide by the social and physical distancing measures.

They were forced to spend hours at the bank premises waiting for attention from few available officials with large number of customers waiting on the queue. Most times, customers were frustrated due to long queues.

Most of the customers told Daily Sun said they had to leave their homes as early as 5.00am to avoid the crowds, only to realise that they still fell under high numbers, like from 100 and above, even with very few people present in the bank premises. They suspected that security officials in the banks were involved in the racketeering of numbers to “ghost customers” for some token.

A bank customer, Joseph Ola, from Kubwa, Abuja, told our correspondent that bank has become market place despite the social distancing order. He claimed that it has difficult to gain entrance into banking hall without waiting for hours or using money for quick entry tally number:

“Since the partial easing of the lockdown, banks have become totally different place from what it used to be. Customers now sit under canopies outside to wait for their turn which may not even come in a day, leaving them with the option to either buy quick entrance card or come to the bank before 4am.

“I had problem with one of my accounts and was asked to visit any of their branches to fix it. The day I went to one of the branches in Kubwa, by NNPC Junction, the kind of crowd I saw was even more than a market square. I was very scared because of the COVID-19 pandemic which government asked us to keep distance from one another.

“It was never observed. Some were not even with face mask. They were all loaded under canopies while some were still hanging outside the gate waiting for the security officials for entrance tally numbers.

“Looking at the scary crowd, I wanted to leave before a young man in his 20s approached and asked me if I wanted to enter the bank. I told him that I could not make withdrawal and that is the only account I have money for now. He offered to give me number 22 for N2000.

“I refused and left to other locations in town with the hope that the crowd would not be much since there are so many branches. But on getting there, I discovered that it was same thing. I had to settle someone financially to gain access to the bank hall.”

Another customer in Wuse 2, Abuja, Mary Audu, confirmed: “It was not as if I arrived the bank late. When I got there, I met an intimidating crowd in the premises. As I was thinking of what to do, a young man approached me and said ‘madam everything is possible with just N1000.’ That was how I gave him the money and it did not take up to an hour before I was called into the bank.”

John Ebidah, a bank customer, said: “They said we should maintain social distance and wear face mask in public places, but what I saw in most of the banks was deadly. People were packed under canopies without spaces and the worst of it, was that most of them were just carrying their face masks without wearing them.

“The crowd was so much that some residents were using it as a source of livelihood. They would go to the bank very early to get numbers which they would exchange for money later in the day. I had to pay because I could not stand the stress and I really needed to get some money from my account.”

Nyanya resident, Abdullah Musa, spent two days struggling to update his account without success. He had to summit to the new trend of money for quick entry card: “Before they could get to my number on my first day, it was closing hour. I had to go, thinking that coming to the bank early would be the solution.

“The next day, I got to the bank at about 5:30 am, only to discover that I was number 120 on the list. I asked for the other customers but no one answered me. The people I met were not up to 40.”

Some residents confessed that they are making fortunes from the large crowd at almost all the banks. David Ali revealed that he used to go to a particular bank as early as 4:30 am. He would get at least five entrance cards each day which he would sell to customers at different prices.

His confession: “This COVID-19 has crumbled everything for us. Nothing is working despite the easing of the lockdown. Everywhere is still tight. The very day it was called off I went to the bank to update my account, seeing the crowd I knew it would be a very good business opportunity if I could get some entry numbers and sell to desperate customers. On the first day I made N2,000 but now I used to make more than N5,000 on daily basis and the population is even increasing by the day.”

Evelyn Ameh from Jabi said: “It is a very sweet and promising business. All you need is to visit the bank very early and stylishly collect lots of numbers from the security officials.

“You must be smart to succeed in this business because some of the security officials won’t give you more than one. I don’t operate in only one branch. If I am in this bank today, tomorrow I will move to another. I make more than N7,000 on daily basis.”

A security official in one of the banks who pleaded anonymity confirmed that he heard from people that they are getting quick entry cards with financial token but have not seen any: “It may be because of the large number of people we are attending to.”