Shock As Alleged Massive Fraud Is Uncovered In LAWMA


There has been a case of alleged fraud surrounding the Lagos State waste management authority, LAWMA. 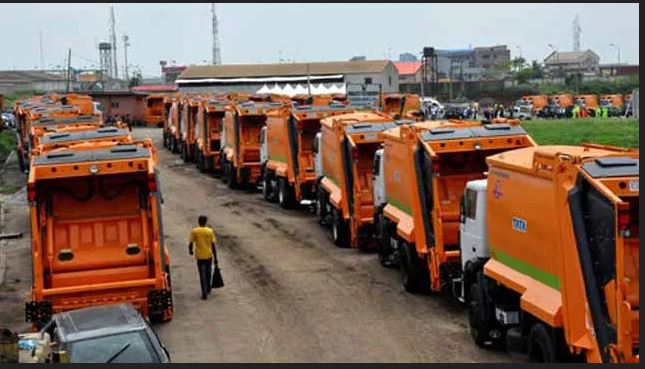 Shock As Alleged Massive Fraud Is Uncovered In LAWMA

Hundreds of millions of naira have been discovered to have been allegedly defrauded at the Lagos State Waste Management Authority, LAWMA.

The lid which sensationally blew off massive racketeering at the agency, was sequel to an investigation of the forensic audit of LAWMA, following information by a group of whistleblowers, identified as “Concerned LAWMA operators.”

Series of shady deals which ran into several million has led to bleeding of the State’s treasury.

Statutorily, LAWMA’s brief includes oversight of PSP operators, sweepers of highways, clearing of marine waste and market management, as well as the de-silting of the primary and secondary drainage.

No fewer than 600 operators are accredited by LAWMA and they, in turn, employ more than 16,000 sweepers and hundreds of supervisors. Or, so it is stated in the books.

The alleged sleaze specifically involved the padding of the wage bill for highway sweepers and their supervisors for several months by a cartel led by a lady, (name-withheld) but simply identified as “Iron Lady.” She was said to enjoy the backing of some powerful political actors in the state.

The 66 routes the “Iron Lady” controlled effectively put her share of the Lagos waste market at more than 10 percent.

To ensure that there was enough cash to feed the guzzling elephant, funds budgeted to take care of other critical like marine service, public transport, drainage de-silting and used tyres clearance were said to have been cleverly converted into offsetting the bogus and ever-rising wage bills, thereby leaving those equally essential needs to suffer.

Both Gbadegesin and Odumboni were appointed last year by the Babajide Sanwo-Olu administration with the intent to restoring LAWMA back to the original masterplan and cleaning up the mess left in the waste management sector as a result of the “disastrous romance” the preceding administration of Governor Ambode entered into with Visionscape.

Whereas the former came from ICT background, the latter had a rich experience in the financial sector and was head-hunted from a top-notch financial institution in the United Kingdom.

Though no official reasons were given for Gbadegesin’s exit in May, our investigations revealed that Sanwo-Olu, a no-nonsense Governor with zero tolerance for sloppiness or corruption, took the action to allow unimpeded forensic audit of the agency following security reports cataloguing shady deals and primitive looting of LAWMA’s treasury.

The whistleblowers complained that “Iron Lady” had forcibly hijacked routes concessioned to them originally by LAWMA by unleashing thugs on their workers on duty and dropping her powerful connections to intimidate them.

Their decision to spill the beans was apparently triggered by displeasure at what was described as “an orchestrated campaign of disinformation in a section of the social media” capped with a protest by “a rented crowd of women” at the State House, Marina, Lagos, at the weekend.

The protesters, all women, it was gathered had claimed they were highway sweepers and complained of being owed a backlog of four months wages.

While all were chanting solidarity songs, some threatened to strip themselves right-away to embarrass the governor. It took the donation of an unspecified amount and a passionate plea by the security personnel on ground before they could be dispersed.

According to a source, intriguingly, no sooner had they dispersed from the Marina State House around 2 P.M than they regrouped in front of the governor’s family compound at Omididun Street, near the palace of Oba of Lagos on Lagos Island, fueling suspicion of being tele-guided.

Dissociating themselves from what they described as the “show of shame,” the “Concerned LAWMA operators” said, “To the best of our knowledge, genuine highway sweepers are being owed for the month of May only.

“The reason for the delay is because of the recent change of leadership at LAWMA. To tell the truth, the new leadership had cleared the backlog incurred by Gbadegesin almost as soon as they assumed office. We believe this is a sponsored protest to distract public attention and blackmail the new management from sustaining the ongoing audit of LAWMA which has revealed a lot of skeletons in the cupboard.”

Specifically, the “Concerned LAWMA Operators” alleged that more than half of the total of 66 “prime” routes controlled by the “Iron Lady” were originally allocated to them during the leadership of Dr. Ola Oresanya but “later snatched from us with the use of thugs armed with dangerous weapons.”

According to their spokesman, who craved anonymity, “For the avoidance of doubt, we wish to state that we’re are in total support of the ongoing audit of salary payments made by LAWMA in the last one year.

“However, the reason why we are crying out now is because we reliably gathered that government auditors have visited some of our locations but discovered ghosts had been collecting salaries all these months without doing any job.

“But the truth of the matter is that some people were using the name of our routes to collect money from LAWMA. It’s very easy to identify those who were collecting such money. Their bank accounts have names.

“We’re aware that after the verification exercise at Ikorodu, the next port of call in the coming days will be routes on Lagos Island as well as Victoria Island. We believe these sponsored protests are to blackmail LAWMA from forging ahead with the audit lest more skeletons be uncovered.

“We therefore passionately appeal to the auditors not to be dissuaded or intimidated in the name of Lagos taxpayers and beg the state governor to direct the new M.D to restore our routes that were hijacked from us.”

Concerted efforts to reach the “Iron Lady” for her reaction were unsuccessful as at press time. Her office located at No. 72, Oja Oba, Adeniji Adele Road, Lagos was under lock and key on three occasions when visited.

But a source close to her volunteered this: “Yes, it’s true that Madam has had some issues with them at LAWMA in recent time. But I can assure you that things are being sorted out and Madam will surely bounce back and put her enemies to shame.”

How Fraud Was Carried Out

For effective statewide coverage, LAWMA delineates the 20 councils and 37 development areas into routes and allocates such to licensed operators who, in turn, employ and assign sweepers and a supervisor on each route.

What a typical unscrupulous operator does to game the system is to pad the monthly invoice submitted to LAWMA with fictitious names for payment.

From the investigations, trouble started when auditors approved by the governor hit Ikorodu axis over the last two weeks to verify the claims, only to discover that most of the names submitted by “Iron Lady” to collect money previously were nonexistent while a good number of the routes were found practically unkempt.

At the end of the verification exercise, twelve of the routes were found to be practically abandoned as no sweepers were found on site.

In the books, she had in her employ on the 66 routes a total of 2,310 workers. Each route engages 33 sweepers and 2 supervisors. Based on those figures, her company was collecting over N80 million monthly from LAWMA.

However, “it was not too difficult to uncover the racket through the introduction of biometrics. On the appointed day, only half of the number touted showed up to either have their passport photograph taken, thumbprint collected and phone number registered. In some cases, a sweeper would be discovered to own several phones documented under different names.” a source said.

Allegations against the “Iron Lady” were hardly restricted to “ghost workers,” and indiscriminate use of thugs to subdue and dominate competitors in the Lagos waste management sector. One of her victims was said to be Dr. Daudu, a retired Permanent Secretary in the Ministry of Local Government Affairs and Chieftaincy Titles.

He was allegedly physically assaulted by the “Iron Lady’s” thugs in April during the nationwide lockdown.

On sighting them that fateful day, the elderly Daudu was said to have appealed to the “Iron Lady” to set a good example to the public since she and her folks were moving around in LAWMA-branded aprons.

It took the intervention and insistence of the body of retired Heads of Service, Permanent Secretaries and Commissioners to compel the then LAWMA boss, Gbadegesin, to make her apologize to Dr. Daudu several days later.

Meantime, LAWMA has clarified its position on the delayed salary payment to street Sweepers.

The clarification becomes imperative in view of the recent pockets of protests and agitations over the issue.

Odumboni disclosed that the sweepers were directly engaged by the contractors of the agency, who are also responsible for their monthly payments and upkeep. He noted that the contractual agreement only exists between the authority and the contractors.

Odumboni maintained that the State government prioritises the welfare and wellbeing of its personnel and affiliate companies adding that LAWMA had made April payments to the contractors for disbursement to their staff, adding that efforts were ongoing to ensure the prompt release of subsequent payments.

He stressed that the Authority appreciates the great work the sweepers are rendering, especially during this COVID-19 pandemic, and gave an assurance that LAWMA will continue to ensure prompt payment to its various contractors.

“We appreciate everyone who has shown concern and understanding of our efforts in ensuring a consistent and sustainable cleaner Lagos in line with the T.H.E.M.E.S Agenda”, he added.

He, therefore, solicited for continued support and understanding, stressing that the issue of delayed payments will be discussed with the contractor and amicably resolved to the satisfaction of all stakeholders.