Despite the ban on large gatherings due to the coronavirus pandemic, most viewing centres in the country were opened as customers trooped in to watch the English Premier League games. 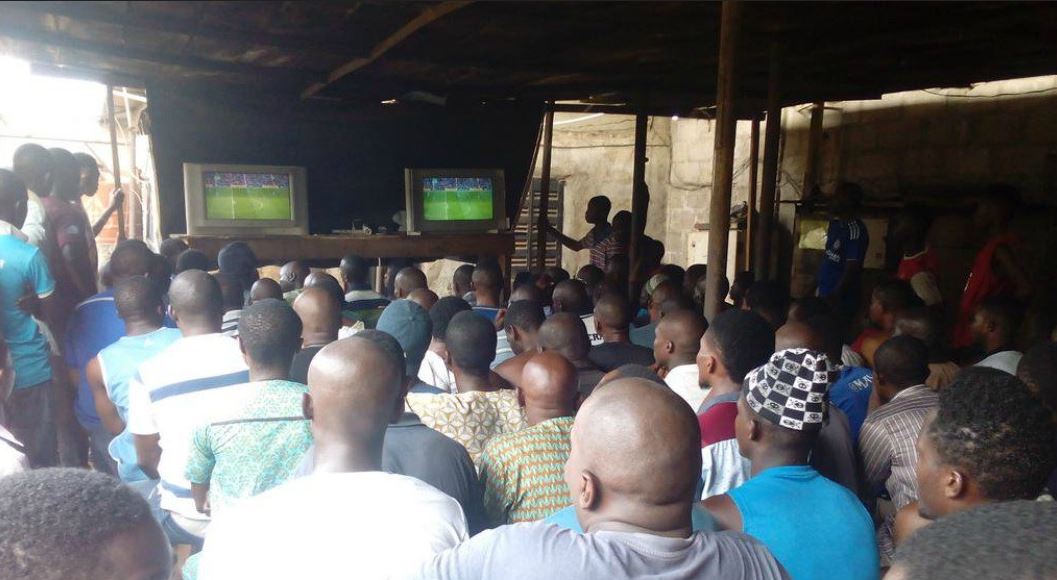 It was business as usual for operators of football viewing centres in some parts of the country, as they entertained customers during Wednesday’s English Premier League games, in defiance to the directive of the Presidential Task Force on COVID-19, which placed a ban on viewing centres operating in the country.

The EPL, which has a large following in Nigeria, returned to action on Wednesday after it was suspended on March 13 due to the coronavirus pandemic.

The league’s return came as a respite to hitherto aggrieved fans, most of who belonged to the lower class and patronise viewing centres for European football.

Some owners of viewing centres in Lagos, Ogun, Ondo and Ekiti states, who spoke to our correspondent last week, expressed delight at the return of the EPL.

They also revealed their plans to maintain social distancing among viewers during the live games.

But a statement by the Chairman of the Presidential Task Force on COVID-19 and Secretary to the Government of the Federation, Boss Mustapha, warning against the re-opening of football viewing centres, dashed the hopes of the operators who have been counting their losses since the global ban on sporting activities.

“We have received reports that some states are contemplating the reopening of schools, television viewing centres, sports stadiums and other places where large gatherings could take place,” Mustapha stated at the PTF’s press briefing on Monday.

“The PTF re-emphasises that it is not yet safe to do so and that utmost caution should be exercised. The PTF guidelines should still be complied with while considering decision of this nature.”

But checks by our correspondent showed that several viewing centres opened on Wednesday, with fans trooping in to watch the EPL matches involving Aston Villa versus Sheffield United and Manchester City versus Arsenal.

Several of the centres monitored by The PUNCH showed that the fans didn’t wear facemasks and failed to observe social distancing. Also, there were no sanitary facilities on ground for usage.

Adeola Ajide, who watched both games at a viewing centre on Ebiere Street, Isolo, Lagos, said, “The viewing centre at my end is open, though no soap and water to wash hands but all I can see here is social distancing and the use of facemasks.

“The population isn’t as much as we used to have it before the lockdown. I guess the rain is another factor too.”

“Social distancing didn’t work here; I can tell you, I’m the only one wearing a mask in a hall containing 23 people. There’s also no social distancing and the operator of the outlet didn’t provide water, soap or sanitisers for the customers,” John Olakunle, who watched one of Wednesday’s EPL games at a viewing centre on Funsho George Street in Puposhola area of Abule Egba, Lagos, said.

In Makurdi, the Benue State capital, our correspondent learnt several viewing centres were open for business on Wednesday.

A fan, Friday Tersoo, who watched the City versus Arsenal game at a viewing centre on Bida Street, Wadata, Makurdi, said, “The hall is overfilled with fans, who were eager to watch a high-profile match live for the first time in three months. The operator said only three people should sit on each bench, but nobody obeyed him because of the large crowd. Only few people wore facemasks. Everyone is just happy that football is back.”

A viewing centre operator in Akure, Ondo State, who spoke under the condition of anonymity, admitted he showed the game.

“Fans still came out to watch, so I didn’t have a choice but to show both games,” he said.

However, checks by The PUNCH showed that some of the operators complied with the FG’s directive.

In Benin City, the Edo State capital, all the centres monitored by our correspondent were closed, but fans trooped into hotels, to watch the opening games of the EPL.

The two viewing centres visited by The PUNCH in Arepo, Ogun State, were locked while the Arsenal, City game was ongoing.

A football fan in Mararaba, Nasarawa State, Edache Abutu, told our correspondent he watched the game from home after the viewing centres in his area refused to open for business.

“No viewing centre is showing around here, they are very strict with the directive not to open,” he said.

Our correspondent also gathered that in areas where viewing centres failed to open, fans trooped to bars to watch the games.